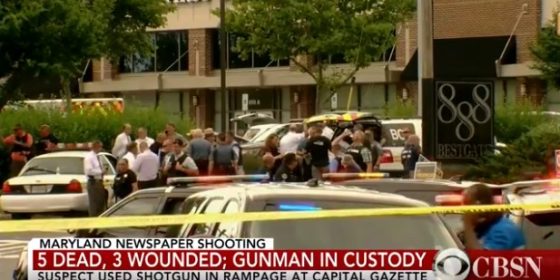 UPDATE: The suspect has been identified as a 38-year-old who had problems with the targeted location for years. It was a long-standing dispute and the attack was targeted.

ANNAPOLIS, MARYLAND — A suspect opened fire inside a building which housed a newspaper and other businesses, killing 5 people with a shotgun. That suspect did not exchange any gunfire with police and was taken into custody where he refuses to speak.

Five people were killed Thursday in a shooting at a local newspaper building in Maryland, and several others were wounded, officials in Annapolis said. One suspect is in custody.

The shooting at the Capital Gazette newspaper prompted a massive police response, with employees evacuated from the building with hands raised above their heads. The Gazette is a local newspaper owned by The Baltimore Sun.

The suspect destroyed his fingertips so that police would have a difficult time identifying him. As of right now, police do not know who he is.

A law enforcement source said that the suspect is in his 20’s.

The incident started at 2:40 pm local time when the suspect entered the building. Police said that they arrived to the scene in 60 seconds after the first call.

Phil Davis, a courts and crime reporter for the Gazette, was tweeting after everything happened. One tweet stuck out, and he’s completely right. No one knows how it feels or how they will react during an active shooter situation.