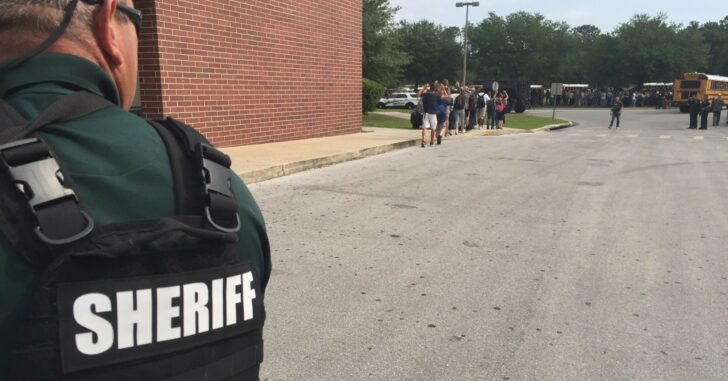 OCALA, FLORIDA — An armed School Resource Officer arrived to the scene of a shooting and had placed the suspect into custody, ending what could have been a longer assault on students and teachers.

The shooting happened Friday morning at Forest High School in Ocala. The suspect was first identified as a student, but later clarification shows that he was not a student at the school.

He brought a shotgun into the school concealed in a guitar case and blended in with students. At some point, he fired a shot at the bottom of a door, and some pellets from the shotgun blast struck a student in the ankle.

As soon as the resource officer heard the noise, he rushed over to the area.

The suspect was quickly taken into custody by a school resource officer identified as Marion County Sheriff’s Deputy James Long.

Marion County Sheriff Billy Woods said Long heard a loud bang about 8:39 a.m. and immediately rushed to the source of the sound. Within minutes, at about 8:42 a.m., Long reached the shooting scene and the shooter was in custody, officials said.

Long “did not hesitate. He went right in,” Woods said at a news conference.

There is no telling what the gunman had planned or how much damage he was looking to do, but one thing is clear. Had an armed resistance not been there, this kid could have fired more shots and/or made a clean getaway. Thanks to Long, none of those were an option.

Here’s a video of police breaching my class after shots were heard about 10 feet outside my classroom. Police and law enforcement responded quickly and efficiently. I always had a fear of something like this happening to my school, I’m so thankful to be okay. pic.twitter.com/JJ4U6XU32j

In the video above, you can see police coming into a room and telling everyone that they are alright. While the students hands are up, the police check the room for potential threats.

The shooting happened on April 20th, the same day that a nationwide walkout was planned to protest ‘gun violence’. This particular school had planned to participate, but the event was canceled in light of what had taken place that morning.

The media took note of this thwarted school shooting but unless there’s a lot of death and destruction, they’re rather mute. This type of outcome doesn’t feed ratings, and is why they are overlooked. If the US population actually saw these events like they do the tragic ones, I am certain that we would have a lot more people fighting for the idea of armed personnel inside of schools.

Previous article: Not Everyone Wants National Reciprocity, Including These Police Chiefs Next article: 19 Years Later, Columbine Survivor Says That Teachers Should Be Armed, Won't Send His Own Child To Unarmed School