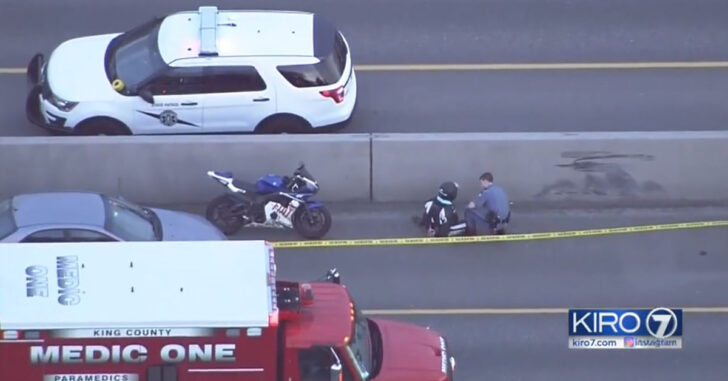 A 23-year-old woman riding a motorcycle had found herself the target of a 60-year-old man while out driving on the interstate back in February. Since the incident, it was recently announced that she will not be facing any charges.

The prosecutor’s office says that according to witnesses the incident began when Jones boxed Bowlin, who was riding a motorcycle, “into a location she could not drive away from. After exiting his (Jones) vehicle, he (Jones) aggressively approached her (Bowlin) on the shoulder of Interstate 5.”

The prosecutor’s office then says that a fight that followed was started by Jones, and that at some point during the altercation, “Bowlin head-butted Jones, who then drove Bowlin’s head into the jersey barrier before taking her to the ground. Bowlin shot Jones once in the chest when he attempted to climb on top of her.”

The woman, who has not been on camera for an interview, is hopefully healed from her ordeal. If she had not had the means to defend herself that day, this aggressor could have done some serious damage.

It’s an absolute shame when a last-resort method of defense has to be used, but sometimes there simply is no other way to stop a threat.

If you ever find yourself in a road rage incident, try to get away and if you can’t, maintain a cool head. You, just like any other concealed carrier, need to try and deescalate the situation as much –and as quickly– as possible.

If things turn for the worst, like they did in this case, then best judgement is used to decide whether or not you’re going to draw your firearm.