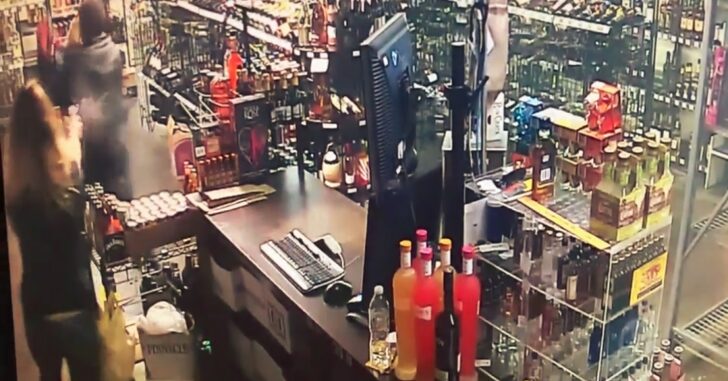 TULSA, OK — A pair of liquor store clerks were thrown into the fight of their lives when an armed robber attacked them earlier this month. What’s more, it was caught on video. As KTUL reports:

Tulsa Police is investigating after a suspect was shot while attempting to rob Forest Acres Liquor store near 13th and Memorial Thursday evening. Officers say they received the call at 6:12 p.m. that an employee had shot a robber. The clerk told officials they shot the suspect at least twice. The employee is being checked out for a head wound, but no one else was injured. Police say the suspect showed up at a local hospital and he was not in good condition. Homicide Detective Dave Walker said they initially thought the suspect had died at the hospital, then found out he was still alive, but remains in critical condition.

Circa further reports that the suspect, Tyrone Lee, was connected to 10 other robberies in the area. Lee sustained multiple gunshot wounds from the two clerks. There are two things worth noting here: First, this suspect sustained multiple gunshot wounds. He continued to struggle and present a threat until he ran off. Although it’d be fantastic if one shot ended every gunfight or deadly threat, sometimes that’s not the outcome. The revolver above appears to be a .38 Special — although that’s just me eyeballing it — and a semiautomatic of a caliber I’m not certain of, but it seems small. A .38 Special is a perfectly acceptable self-defense caliber, and frankly I’m surprised the man was still standing, let alone fighting. Be sure to invest in high quality self-defense ammunition. Second, these clerks kept their firearms in close proximity, but off-body. As you can see in the video above, that delay was horrible. Always carry on-the-body whenever physically possible. When carrying, convenience is key. What do you think? Please share this on Facebook and Twitter and let us know!
Categories: General, Guns Saving Lives, News, Video

Previous article: Walmart, Kroger, Join DICK'S With New Policies That Refuse To Sell Firearms To Those Under 21 Next article: AMBUSH: Dallas Homeowner Forced into Gunfight While Still in His Own Car