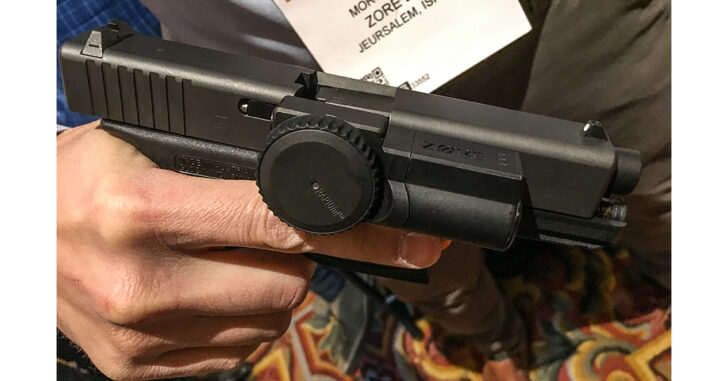 We first heard about ZORE’s novel gun lock concept almost two years ago. Its design was innovative enough that their IndieGoGo fundraising campaign attracted more than half a million dollars to get them into production. So when we saw them hawking their ZORE X Core lock in the SHOT Show’s NEXT Pavilion, we had to see what all the fuss was about.

What makes their first product, the ZORE X Core, unique is its RAPIDial locking mechanism. Once the unit is locked, you simply need to rotate the dial the requisite number of clicks in each direction to open it. The detents are easy to feel and count as you go. And since the starting point doesn’t matter, you don’t need to look at the dial….you can do it in the dark.

The ZORE X Core uses a cartridge-shaped insert that rests in your pistol’s chamber. Once locked, you can’t rack the slide. If you try, a collar around the “cartridge” expands, clamping itself very securely in place. If you manage to saw or somehow break the locking mechanism off, the collar expands, making your pistol a paperweight (the ZORE folks tell us there is a way to free your gun that they’re not disclosing). The ZORE X Core is caliber specific. Their first model is built for anything that takes a 9mm cartridge and will secure virtually any semi-auto firearm. They’ll be working on .40 and .45 caliber versions next. The ZORE lock is electro-mechanical and has a series of colored LEDs on the top that alert you when your batter begins to run low. If you somehow let your CR2 battery run all the way down, the unit’s backup code — which ZORE tells us they do not keep a record of — will let you remove it.

We’ve seen a lot of interesting lock designs, but this one is definitely up there on the innovation scale. While we only tried it a few times at their booth, it seems like an ideal nightstand lock for gun owners with small children. The only thing that might hold you back is the price. They sell for $179.90. Let’s hope that price comes down as sales volume increases.