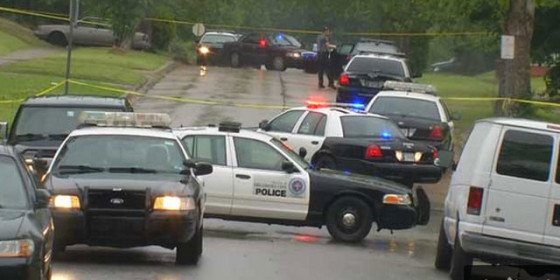 OKLAHOMA CITY, OKLAHOMA — Rookie Officer Adam Eller, who was responding to a burglary call with his partner, found himself the victim of a violent attack by one of the suspects.

Here are the details of what happened on Tuesday afternoon:

The two suspects in the burglary, Tremaine and Jermaine Williams, are twin brothers. Police say Tremaine was already gone when they arrived, but Jermaine was there and when he saw the officers he took off on foot.

During the chase the two officers became separated. Eller found himself alone when he caught up to Jermaine in a driveway of a nearby home and as he tried to place him under arrest, a fight ensued. During the struggle, Jermaine was able to take Eller’s police baton and then proceeded to strike him over the head somewhere between six and 12 times.

Then during the attack, a witness –who was armed with a handgun– ran up to the two and pointed it at the suspect. He yelled for Jermaine to stop his assault on Eller and if he didn’t, he would shoot him.

The assault stopped, and both suspects were eventually taken into custody.

Eller was rushed from the scene to OU Medical Center with serious injuries, but was released on Wednesday and is expected to make a full recovery.

This armed witness, still unnamed, may have been the only thing stopping the suspect from doing even more harm than he did.

Previous article: BAD DAY: Homeowner Shot By Responding Deputy After Home Invasion Next article: Question: How Long Did It Take You To Choose Your First Concealed Carry Firearm?