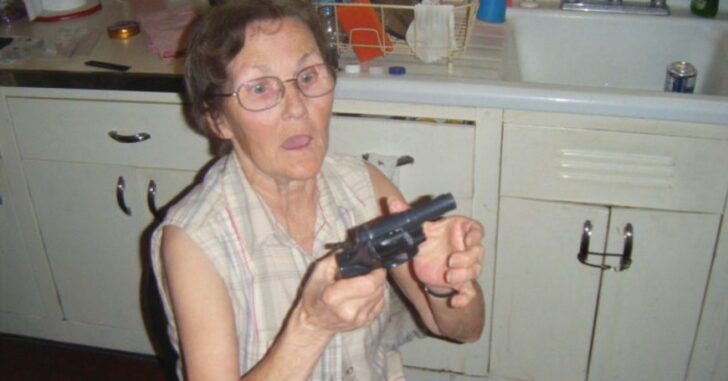 “The Wall Street Journal reports that interest in guns among retirees is booming. In just the last five years, more old people are buying guns, training with guns….” Good news, right? Not if you’re among the insufferable douchebags who write for Gawker. You know, the online publication that now owes Hulk Hogan $140 million in punitive and compensatory damages? Yeah, that one. Anyway, among what passes for content for Nick Denton’s sneering, bottom-dwelling denizens is laughing at old people who choose to avail themselves of their Second Amendment rights . . .

To Hamilton Nolan, seasoned citizens are just a bunch of incompetent feebs.

When you’re old you’re slow as hell and decades of muscle erosion have made you weak. Pretty much any healthy young person can beat you up. Is a gun gonna even things out? Nope. In order for that gun to work you have to pull it out and aim it in a moment of crisis. While you’re fumbling to do that, all slow, a young person is just pushing you on the ground. And taking your gun out of your feeble hands.

Leave the guns to the young nuts, oldie.

And it won’t surprise you to learn that Nolan’s unfamiliar with Colt’s famous maxim either.

I’ll lay 5-1 odds that any street criminal can kick you in the knee and chuckle as you roll around on the ground, grasping for the gun you dropped, as they rifle through your purse and then steal your gun, too. That gun you bought will end up in a pawn shop before you ever get to blow a hole in one of these disrespectful young menaces.

Besides, oldsters should just shut up and make it their business to stay out of trouble.

And where are you going anyhow that’s so scary? The grocery? Those teens may be delinquents but they probably aren’t a stickup gang. Please return that Beretta to the nice gun dealer before you mistake a stray rap lyric for a death threat and put a bullet in some poor C student cutting class.

Because as everyone knows, nothing bad ever happens in places where gramps and granny are likely to go. Places like grocery stores. Or Target. Or gas stations. Or a hospital. Why would an older person — or anyone else, come to think of it — decide that armed self defense is a rational option?

Older people are one of the last demographics — along with “hillbillies,” white people, the overweight, and those who practice Judeo-Christian religions — about whom it’s still socially acceptable for condescending twits like Nolan to make fun without the social media pitchfork mafia piling on and hounding them out of a job. So they’re easy marks, which doesn’t make it right. Or accurate, for that matter.

No doubt some superannuated individuals on whom Nolan trains his snark hose have, in fact, lost something off their fastball. They may no longer have the dexterity or eyesight they used to. Which means…precisely nothing.

The great thing about the Bill of Rights — the Second Amendment included — is that they’re allindividual rights. So while some Americans with a little snow on the roof may not be able to reliably wield a mohaska the way they used to, the Constitution says they all still can. That even includes those who want nothing more than to walk home in peace. People for whom, contra Nolan, failing to take their medication isn’t necessarily the greatest threat they need to worry about.

That inconvenient fact will no doubt disappoint the Hamilton Nolans of the world. That’s a shame, isn’t it?

Previous article: #DIGTHERIG - This Guy and his Springfield 1911 Ultra Compact .45 Next article: First Time Carrying In Public: What To Expect