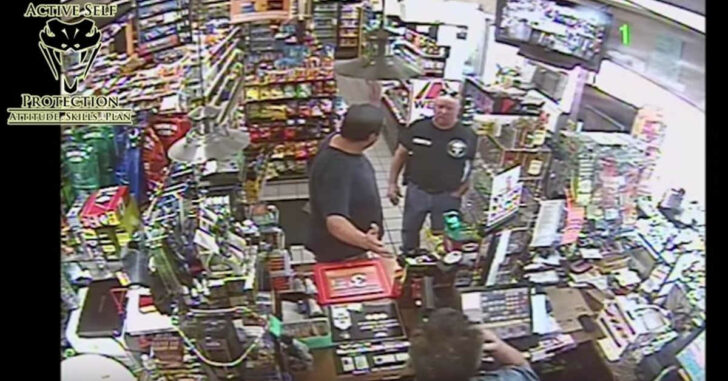 When a customer at a gas station convenience store attempts to start a fight with the clerk, a firearms instructor is unwittingly pulled into the confrontation. What’s noticeable about this situation is the number of clear red flags that were present and how, at each stage, the instructor attempted to de-escalate and avoid the conflict.

De-escalating a conflict before it begins can be a martial art unto itself. The ability to properly convince, distract, or deter a potential attacker from initiating his attack is priceless.

Even the best ‘judo experts’ in de-escalation may sometimes be called to find that red line whereby de-escalation is no longer possible and now it’s time to defend one’s self.

This instructor does precisely that. Let’s break it down.

At the beginning of the video, the customer comes in and begins confronting the clerk. He is causing a commotion, acting threatening, and repeatedly leaves the store and returns only to escalate his aggression.

The instructor quickly sees that the clerk has already gotten on the phone with the police. They are on their way. He is now maintaining his situational awareness — he’s not only observing his transaction with the clerk but also observing where the aggressor is at all times.

Then the instructor attempts to leave the store. He does not attempt to follow the man but is trying to return to his vehicle. When the man intercepts him and begins threatening him, the instructor retreats.

He is evading the threat at this point.

The instructor is open carrying a firearm. There is no concealment of it. The aggressor is not visibly armed and still follows the instructor back into the store and attempts to grapple him. The instructor pushes the man off and, at this point, draws his firearm and tells the man that he is feeling threatened.

He states to the bad guy that he is feeling threatened and he will defend himself.

This is important for two reasons. It alerts everyone (future witnesses) that he is being attacked. He is communicating the threat.

People can then choose to get to safety, call the police, or otherwise get out of the way.

It also lets people know that the gun carrier is the good guy.

Unfortunately, the instructor hits a dead end. He’s stuck. The guy keeps attacking him and he keeps trying to give himself distance but now he’s down to two choices: get attacked or defend.

He shoots the man once at center mass at close quarters. He shot to neutralize and he shot center mass.

This man is so amped up that it takes him several moments to realize he’s been shot. The instructor does not continue to shoot once the man is neutralized. This is something we need to take into consideration when fighting an opponent. That person may not realize what has happened. It takes moments for the body to register damage. During that period, we can see the bad guy continuing to try to attack and grapple the instructor. The instructor realizes he’s neutralized and just defends himself enough until the man collapses.

Instead of fretting over his attacker, the instructor uses that opportunity to move past him and move to safety. This is very important. We can’t get caught up in the shock of the situation. We have to maintain our situational awareness, move past the threat, and move on to safety.

That’s a lot to take in but this is everything that a concealed carrier needs to understand about repelling a violent agitator.

The instructor in this surveillance footage was found not guilty of any wrong doing. That’s why we’re using this as a ‘gold standard’ example of when training meets real life. We have to practice the type of actions that will minimize the chance for a fight and, should it come to it, survive the encounter.