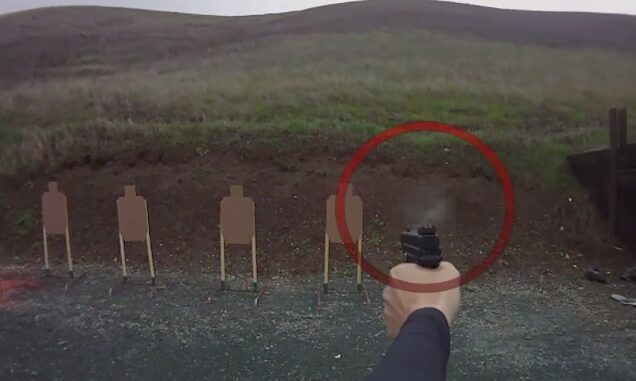 About 1:10 into this video, we have a shooter practicing a drill. On the last shot, we hear a soft ‘bang’ with some smoke coming out of the muzzle. The shooter racks the slide and just as he’s about to pull the trigger again, another person on the range says “STOP STOP STOP”.

A squib load, also known as a squib round, pop and no kick, or just a squib, is a firearms malfunction in which a fired projectile does not have enough force behind it to exit the barrel, and thus becomes stuck.

What the shooter experienced in the video above was a Squib Load. This occurs when a round does not have a powder charge, or too light of a charge. Typically, the primer will ignite and provide enough force to push the bullet into the barrel, but not out. If a second round is fired while the first bullet is in the barrel, an explosion is likely to occur. This is a very serious malfunction and every shooter needs to be able to identify a Squib Load.

Here is a picture that shows the aftermath of a firearm that was fired again after experiencing a squib load: So, if you ever hear a noise that doesn’t sound typical of that firearm being fired, you should cease shooting immediately and clear that firearm to check for a squib.

To see and review the most common firearm malfunctions, take a look at this article.

Previous article: Man Pretends To Surrender To Hostage Taker, Then Draws His Concealed Firearm And Takes A Perfect Head Shot Next article: Man Who Was Accused Of Executing Drunk Driver For Killing His Two Sons Found NOT GUILTY