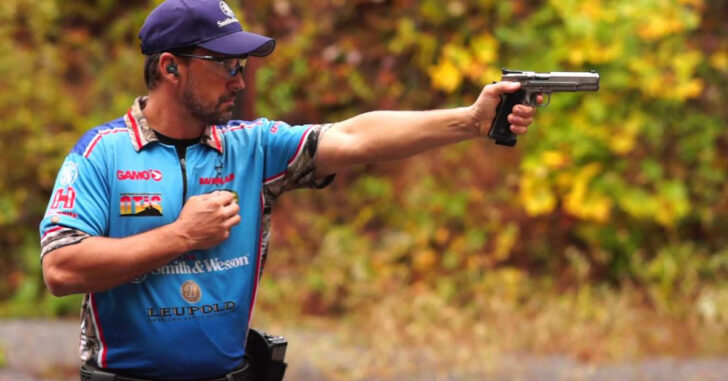 Concealed carry pistols are generally lighter and smaller than full-size pistols. They can be fired from a single hand. This is one of the reasons why it’s so important to choose a pistol that fits well in your hand — so you can eventually learn to shoot it one handed.

That’s not to say you should shoot with one hand when you can use both. A two handed grip is going to be steadier than a single hand. A single hand is a single point of failure. And that brings us to a very important point: every concealed carrier should train to use either hand.

It’s not for the over-the-top scenario where you’re in the middle of a gas station robbery and the robber shoots your dominant arm.

Those are such rare occasions in the first place, it would be training for a single life event that will likely never happen.

Why You Need To Shoot With Your Non-Dominant Hand

The real reason I recommend training to shoot your concealed carry pistol with either arm is because you can’t plan for life events, in general. A good example is a life event like rotator cuff surgery. In a normal world, this results in a downtime of between 10-14 weeks at a minimum and months — if not years — of physical therapy before you’re able to use that arm fully again.

During that time, if your right arm is down, you’re effectively a lefty. If it’s your left, you’re now a righty.

Reasons Why Your Dominant Hand Or Arm May Not Work

These are just a few off the top of my head that could occur to just about anyone and result in a dominant arm being put out of commission.

This messes everything up for most people.

Everything from signing a check to putting a jar of mayonnaise back in the refrigerator becomes a laborious exercise.

Using a gun will be no different. Worse, if you haven’t practiced with your other arm, you’re at a severe disadvantage to get that pistol on target. You also don’t know how “off” your other arm is from your dominant one.

Crossdraw With Non-Dominant Hand To Dominant Side

Most concealed carriers draw from the waistband, dominant side. They bring the gun’s sights up to eye-level, align, and shoot.

If your dominant arm is down — unless you pick up an opposite-side holster — you’re going to be stuck in cross-draw.

Is that something you’ve practiced? It should be.

REMEMBER: Your dominant arm cannot be used for this exercise. Use only your non-dominant arm. Whatever you need to do to load that second magazine, make sure your pistol is always pointed down range. The four fundamental rules of firearm safety always apply.

When you do this exercise, you’ll get a lot of funny looks. There’s no smooth way I’ve seen to drop a magazine and reload another one using only one arm — dominant or otherwise.

That’s okay. It’s better you look like a fool than to have no muscle memory of working through this problem. Problem solving is central to carrying a concealed handgun.

If you did that previous exercise, you’re likely to notice that either your standard holster on your dominant side isn’t positioned in a place that’s easily accessible to your non-dominant arm OR you had to position the holster differently so it was.

You’re used to positioning your handgun in a place convenient for your dominant arm draw side. Now you’re going to need to adjust that holster so it can be reached by your non-dominant arm.

For appendix carry holster wearers, this isn’t much of an issue. For those who like to carry dominant side 3 o’clock to 5 o’clock, you need to adjust. The less time you need to reach across your body, the more time you have to react to the threat and put rounds on target.

When you train for realistic scenarios, include ones that can occur just as a normal consequence of life.

Previous article: Is This A DGU Scenario? Teens Throwing Sand Bags From Overpass, Killing Passenger In Vehicle Next article: When You Should Take Your Gun To A Gunsmith