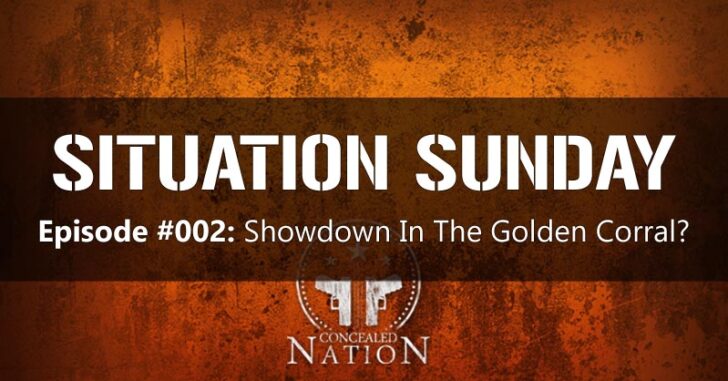 Welcome! Today is the second article in a new weekly series called Situation Sunday. With this series, we will be throwing out a hypothetical situation that someone could encounter during their daily activities and more importantly, how to handle that situation with a firearm.

Here’s how it works:

1. Read the situation below.

2. With the provided information, comment below in the DISQUS comments section (you can login with Facebook if you don’t have an account) and tell us what you would do if faced with the same circumstances.

3. Feel free to add things to the situation that we don’t mention. Eg; after you draw your firearm on an attacker (if needed), they still continue forward towards you. Now, you’ve got to create a storyboard all of your own. What happens next?

4. Don’t be afraid to take the situation all the way through.

Okay, you may never legitimately eat at Golden Corral but let’s pretend for this situation that – for some reason – you’re there.  More importantly, you’ve got two family members in tow.  As you’re heading out of the Golden Corral one evening, you see three men getting into an argument in the parking lot.  Your car is a few rows behind them.

At this point – it’s just words.  One of the men seems to be getting increasingly angry.  The other looks around and sees you.  The third one is standing with his back facing you.   The one who’s spotted you and your family stares for a couple uncomfortable moments before turning his attention back to the man shouting.

Moving in between vehicles, at a calm, steady pace, your vision of them is obstructed as you pass by a parked passenger van.  It’s during this time, you hear two shots fired.  It’s hard to know at this point which of the three men may have fired his gun.  It may not have been any of those men.

Situation:  Your vehicle is visible about 30 ft away and the doors to the restaurant are an equal distance the other way.  You have two family members – neither are armed.  You have your daily carry firearm on you.

Describe:  How you would get your family members to safety.

Have shoot-outs occurred at the Golden Corral?  Before you balk – it has happened!  In Jacksonville, Florida, two brothers were shot and killed outside a Golden Corral.  Authorities speculate it was a drug deal that went awry.  The man who shot them was later apprehended and imprisoned.

Previous article: Show Your Independence By Carrying On Independence Day Next article: HONEST MISTAKE: NC Tower Climber Arrested In NJ For Possessing Firearm; This Man Needs A Pardon, And Our Help