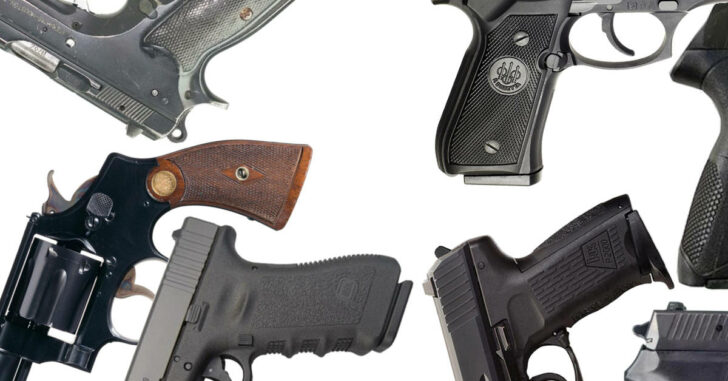 Everyone loves the ‘new-in-box’ gleam of a brand new pistol. However, much like the ASPCA commercials, there’s a used, surplus handgun out there that’s just begging to be loved.

Let’s go over some pistols that are currently out there on the surplus pistol market. These are generally guns that have been adopted by various police or military organizations and then been discarded once a new contract comes in.

The great part about these pistols is that they’re generally premium brand and at a very steep discount from original MSRP price. The quality of the individual arm may vary greatly — so I highly recommend you inspect before you buy.

Fair warning: these are not generally ‘concealed carry’ pistols (sub or micro-compact). Anyone can figure out a way to carry a full-sized or compact gun in a concealed manner but if you’re looking for something an inch wide, these are probably not your first picks. There’s nothing cheap about H&K. While stare longingly at the VP9, I realize there’s just no way I can justify the expense. Walking through to the used, surplus section of the gun store, I noticed quite a few H&K P2000s on sale for $450. That may not sound like a steep discount to some, but if you’re familiar with what H&K charges out of the shelf, you’ll know that’s one hell of a deal.

The H&K P2000 is a striker fired pistol that H&K came out with back in the early 2000s. It’s strikingly similar to another pistol in this list but both have one great thing in common: polymer hybrid reliability. Sig Sauer loves to talk about their new P320s but before P320 or P250 was even a glimmer in Sig’s eye, the SP2022 was on the market. The SP2022 was Sig’s first polymer line pistol. Built to last and a standard capacity of 15 rounds, this compact pistol found its ways into the hands of quite a few foreign police forces. It gave the rugged reliability of the premium priced P226 and P229s while running at nearly half the cost out of the box. The Beretta 92 became a favorite of police agencies across the United States after it was adopted in its military variant, the M9A1, by the armed forces. An Italian gem, this single-action/double-action pistol is extremely reliable, heavy, and accurate.

When the U.S. Army decided to transition to a different pistol, a lot of law enforcement agencies decided to make a switch as well. This has resulted in a steady influx of surplus, used Beretta 92 variants entering the market.

I’ve seen used, good condition surplus Beretta 92s going for as little as $350 and I love it. I remember this pistol from my time in the Marines and I just loved how it fit in my hand. I also love its all steel construction — making it one of the few pistols I used that was heavy in all the right ways. And then there’s the S&W SD9. Whatever happened to this pistol, I’ll never know. Falling somewhere between full-size and compact, it was S&W’s striker fired pistol that was somehow exiled to oblivion.

The gun handles superbly. I hear people tell me all the time that they found theirs in a gun store, brand new, for $325 and couldn’t pass it up.

While I’ve seen them in the ‘used’ section of the gun store, I haven’t heard anyone say they traded it in because it sucked.

This just goes to show that price isn’t everything. You can get a good, reliable striker fired pistol for less than $350 and have it work as good as you’d expect a $575 pistol to run. Sig Sauer has dominated the marketing on modularity of its pistols and rifles. Unfortunately, this has downplayed the early successes made by Beretta. The Beretta PX4 Storm was advertised as a future contender for NATO’s pistol. Touting reversable, ambidextrous controls and a wide variety of modular options, the PX4 — for some unknown reason — just fell flat when it went to market.

I’ve seen reviewers lambast the gun and others take to it like a duck to water. Available in multiple calibers, it was adopted by quite a few police departments but just never stuck around to truly make its mark. I’ve seen PX4 Storms available in a wide array of calibers for as little as $425.

Well worth the money, if you ask me. And it’s a modular gun that you can pick up compact and sub-compact pistol modules for — so it can suit concealed carry needs. The only way I’d ever pick up a Sig Sauer P226 is if I found it in the used surplus section of the store. A new P226 retails for over $1,100 — and occasionally you can find a used one for less than that. People who own the new models rarely give them up. They are workhorses that can land round after round in the black with absolute ease.

Thankfully, plenty of police departments picked up the brand new P226s over a decade ago and are looking to clear them out to make way for something new. This has given me the unique ability to shop around for used, surplus P226s that fall in the price range of $600-700.

Absolutely inspect them to make sure the barrels aren’t bored out but I would be surprised if you found one that was truly done. And at a price point I’d never expect to see a P226, I’m sure to nab one up at the first available opportunity. CZ-75s are worth their weight in gold. Brand new, out of the box, they’re affordable and will easily last any gun owner’s lifetime. The great news is that plenty of foreign police forces decided to pick them up back in the 1980s and 90s and now they’re liquidating them. I’ve seen imported boxes of used CZ-75s, in a wide variety of conditions, coming into the United States. Seeing them on shelves reminds me of the mid-2000s when I saw old Mosin Nagants for sale for $100.

Well, unfortunately, the CZ-75 Bs I see on the shelves in the surplus section are no where near $100. The cheapest I saw was one that was $250 and had visible signs of rust on its exterior. For a gunsmith who was willing to do the work, that would be a steal. For a gun owner looking for a deal right out of the store, it would be a crap shoot.

That said, used but good condition CZ-75 Bs can be found for between $375 and $450 in quite a few gun shops. These are pistols that will run without fail out of the store. Granted, they’re older models and may need more regular maintenance than a new or commercial used one, they can still hold in the fight for probably a couple more decades. Futuristic, sleek, and definitely a different grip than most American commercial pistols, the Steyr Arms class of A1 pistols are extremely utilitarian. Perfect for full-size or compact-size carry needs, the Steyrs are unique in just about every way from your typical pistol.

The sights look different — they use a triangular sight arrangement. Some pistols have pistol locks to prevent them from discharging — not a fan of these but whatever. I’ve had friends report issues with some surplus models they’ve picked up but my experience with used, surplus A1s has been fantastic.

Brand new, out of the box, a Steyr M9-A1 retails for $575. That definitely doesn’t break many people’s budgets. A used, surplus Steyr could go for as little as $400. That’s $175 in savings I can put into holster, ammunition, and range time.

When I go shooting with my buddy — who owns quite a large array of handguns — I usually pick this one up first because it feels so different than all the other guns. I’ll be honest, I love the Steyr M9-A1 because it feels like a sci-fi pistol but shoots with exceptional grace. We’re not putting surplus Glock 19s and 21s down at the bottom because they’re bad. Conversely, I’m putting them down here because I really love seeing them for such a steep discount in the gun store. If I tell you guys right at the top, I’m messing with my own interests.

Quite a few police and law enforcement agencies picked up Glock 19 Gen 3s quite some time ago. Because of government bureaucracy, spending, and wear-and-tear, agencies like to replace their old guns with new ones. When it comes to surplus Glocks, their loss is my gain.

A used, surplus Glock 19 or Glock 21 can easily be picked up for less than $375 in a store. The parts are still good. The spring, trigger, and barrel are going to be fine. Please do inspect for yourself, though, prior to purchase. Quite simply: there’s nothing wrong with a used, surplus Glock 19 so long as you inspect prior to purchase. If the barrel doesn’t look beat to heck, the trigger pulls like it should, and the magazines load and drop like normal, you’re probably good to go. Good luck finding one of these gems in the surplus section of the gun store. When police departments across the country began switching to semi-automatic pistols, quite a few Smith & Wesson 38s started showing up in stores.

They’re good, solid revolvers — perfect for working on marksmanship or just carrying. The revolver is built very solid and it handles recoil wonderfully.

Are there other surplus pistols out there that would absolutely spin heads — but didn’t make the list?

There’s the Astra A-90 — which we’ve reviewed. There’s also the Zastava M70A. I’m quite sure I’ve seen surplus S&W M&P pistols. Would I pick up any of the above and happily shoot them at the range? You betcha.

However, we only had space for ten so I stuck with the ten that I could count on the most people running into. There’s no use throwing out a magically awesome surplus pistol if there’s almost no chance of anyone running into it. If so, the old German Sig P210 would have easily made that list.

If you disagree with the selection or you think there’s an absolute diamond in the rough I missed, please comment in the comment section below.

And, by all means, if you see one in the gun store and it’s listed as a used surplus pistol, snap a photo and send it to us via our Facebook page. Don’t forget to like and subscribe to our Facebook channel to be kept up to date of all the latest and greatest gun news, reviews, and gear.

Previous article: YouTube Vs Gun Publishers: Guess Who Loses Next article: Woman Is Shot After Forcing Herself Into Home