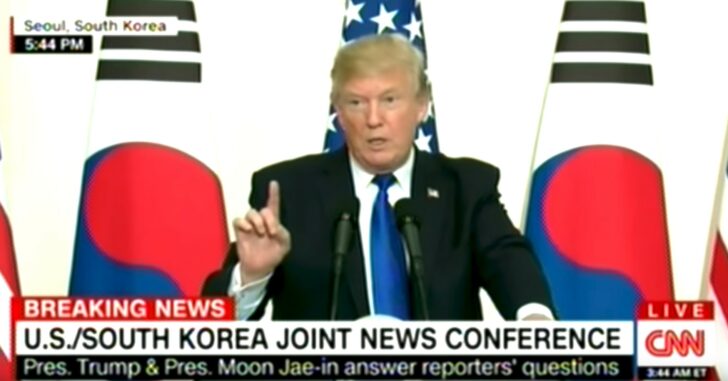 We know that the media will take any chance to talk gun control following a tragedy like the one that happened just days ago in Texas, and this is no exception; even if the President is in South Korea talking about North Korea’s nuclear capabilities. An NBC reporter had the last question during the conference, and I’m not complaining about the question because the President gave a brilliant –and logical– response. The question:

…I wonder if you would consider extreme vetting for people trying to buy a gun.

The response from President Trump:

Well, you know you’re bringing up a situation that probably shouldn’t be discussed too much right now, we could let a little time go by, but its ok. If you feel that’s an appropriate question, even if we’re in the heart of South Korea, I will certainly answer your question. If you did what you’re suggesting, there would have been no difference three days ago, and you might not have had a very brave person who happened to have a gun or a rifle in his truck go out and shoot him and hit him and neutralize him, and I can only say this: if he didn’t have a gun, instead of having 26 dead, you would have had hundreds more dead, so that’s the way I feel about it.

A few days after the incident and we now know that the gunman had a bad history of domestic violence and much more. It was revealed that in 2012, the gunman escaped from a mental hospital after making threats against his superiors. Also new today is the Air Force taking the blame for not adding the gunman’s history into the database that would have prevented him from purchasing any firearms as a result of the background check coming back as a solid NO. The incident that was failed to be reported was a domestic violence court-martial. Early on, President Trump made a statement about this incident and stated that we don’t have a gun problem, but we do have a mental health problem. This case, like many (if not all) of the others, is no different. America is facing a mental health apocalypse and instead of focusing on that, the media continues to call for more gun control legislation. And let me tell you; the more gun control we have on the books, the more likely it is that we won’t have men like Stephen Willeford who are able to go after a mass shooter with his own rifle. The gunman is said to have used an AR-15, and that’s exactly what Mr. Willeford used against the gunman. Stick a pistol in Mr. Willeford’s hands instead, and he might not be here to tell his story.
Categories: General, News, Video