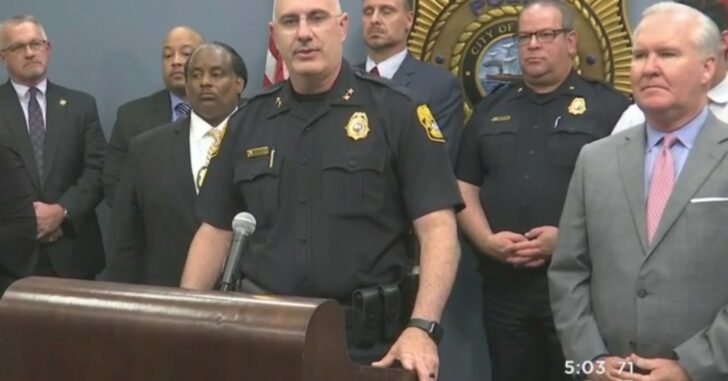 TAMPA, FLORIDA — The man that police say is responsible for four killings in the Seminole Heights neighborhood of Tampa has been caught, after they received the break in the case they’d been looking for.

The way that the suspect was captured was unexpected, and I’m still trying to wrap my head around it.

The crack in the case came Tuesday when Howell Emanuel Donaldson, 24, brought a bag with a loaded handgun to his job at a McDonald’s and asked a co-worker to hold it while he went across the street, authorities said. Restaurant workers thought that was odd and when Donaldson left, they reported the gun to a police officer who was doing paperwork there, setting off an investigation that linked Donaldson to the shootings. Aside from matching shell casings at the shootings, authorities said location data from Donaldson’s cellphone put him at the scene of at least three of the killings.

According to the arrest report, Donaldson gave the firearm to a co-worker and asked them to hold it for him while he went across the street to ask for a payday loan. As soon as he left, the co-worker alerted their manager. Coincidentally, a Tampa police officer was sitting in the restaurant doing paperwork and was alerted by the manager.

Then, when Donaldson arrived back at the McDonald’s, police were waiting for him. The 24-year-old is said to have purchased the .40 caliber Glock from Shooter’s World in Tampa on October 3rd, just 6 days before the first shooting. With the purchase, he also bought a 20-round box of ammunition.

Police confirmed that it’s the gun they’ve been looking for, and have already matched it with the shell casings found at the crime scenes. Location data obtained from his cell phone also place him at 3 of the 4 shooting locations at the time they happened.

It appears that Donaldson didn’t live in the neighborhood he allegedly targeted, which police suspected the person responsible did live there, and they do not yet know the motive behind the killings.

Donaldson is being charged with four counts of first degree murder. His first court appearance is scheduled for today.

Reports state that he planned to leave the state, but why he gave the gun to a co-worker is unknown. And, quite bizarre behavior.

We’ll follow up on this story when more information becomes available.

Previous article: *WATCH* Two Armed Robbers Dead After Father, While Holding Infant Son, Shoots After Having Gun Pointed At Him Next article: Woman Defended By Step-Father After Man Goes After Her With Hammer