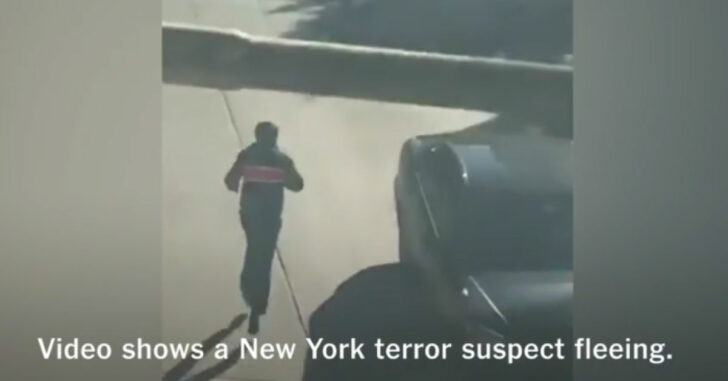 NEW YORK CITY, NEW YORK — A terrorist made the decision to rent a truck and drive it down the sidewalk, hitting anything and anyone in his path. It’s the worst terrorist attack in NYC since 9/11.

Eight people were killed and at least 12 others injured.

[THE TERRORIST], 29, rented a pickup truck from a Home Depot in New Jersey at 2:06 p.m. on Tuesday before crossing into Manhattan on the George Washington Bridge, the police said in first public timeline provided by authorities. At 3:04 p.m., a camera caught him driving onto a bike path alongside the Hudson River, where the police said he appeared to be targeting pedestrians and cyclists as he mowed people down.

After crashing into a school bus near Stuyvesant High School in Lower Manhattan, he jumped out with a pellet gun and a paintball gun and shouted “Allahu akbar,” Arabic for “God is great,” the authorities said. Investigators found a number of knives in and around the truck, the police said. And near the truck was a handwritten note with a few lines of Arabic indicating allegiance to the Islamic State, law enforcement officials said.

After he jumped out of the truck, he ran through traffic and was shot by police.  He survived, and is currently in custody.

The terrorist, while not having much trouble with law enforcement throughout his life, did have an anger problem that was noted by many people. While living in Tampa, FL, a mosque that he worshiped says that he had drawn concerns while being there.

A preacher with the mosque spoke to reporters;

“I used to tell him, ‘Hey, you are too much emotional,’” Abdula said. “‘Read books more. Learn your religion first,’ He did not learn religion properly. That’s the main disease in the Muslim community.”

He added, “I never thought that he would go to this extreme.”

With his fake guns and very real truck, this lost individual was able to wreak havoc on NYC with his determination to kill and cause destruction. There is no word on whether the terrorist tried to purchase guns at any time.

Worth mentioning, the terrorist was also an Uber driver, which means that he needed to pass a background check in order to drive for the company.

Also worth mentioning, NYC should loosen their concealed carry laws. If you’re asking why, you’re part of the problem IMHO.

The names of those killed in this coward’s attack have been released; Nicholas Cleves, 23, of Downtown Manhattan; Darren Drake, 32, of New Milford, N.J.; Anne Laure Decadt, 31, of Belgium; and five Argentine tourists who traveled to New York for a 30-year high school reunion celebration. They were identified by the Argentine government as Hernán Mendoza, 47; Diego Angelini, 47; Alejandro Pagnucco, 47; Ariel Erlij, 48; and Hernán Ferruchi, 47.