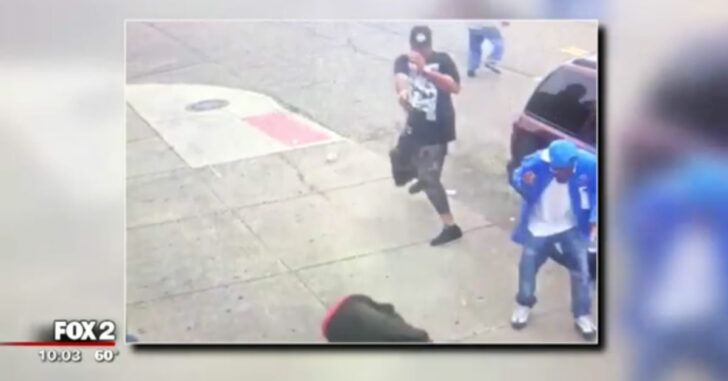 DETROIT, MICHIGAN — An armed thug got more than he bargained for when he accidentally chose a victim who was armed and ready to defend himself. The incident is one of many that show legally armed citizens defending themselves against the people who intend to do harm. Fox 2 Detroit reports, after speaking with the armed citizen;

“I turned and looked and saw the other gentleman had a gun pointed at my face,” the man said. “I was able to knock his hand down and the gunfire rang out.” The CPL holder, who is seen in the video wearing a black and white T-shirt and shorts, said the first thing he thought of when he saw the gun was to grab his. Video shows both men started shooting.

You can see the video above, which clearly shows the armed citizen faced with a gun, and then quickly reacting by pulling a gun of his own.

Police told the CPL holder it was a good thing he was legally armed or he and his cousin may not be alive today. “It makes me mad because you have people out here that work every day. They are innocent; you want to take from them,” the CPL holder said. “These guys, I definitely feel don’t need to be back out on the street because someone else might get hurt and it might happen in a different way.”

It’s a good day when the armed citizen is able to defend his or herself, and it sends a message to thugs everywhere that some people refuse to be victims. The suspect was taken to the hospital with multiple gunshot wounds. His mother, who called Fox 2 Detroit, couldn’t understand why they wouldn’t let her see her son. As we know now, it’s because he was the suspect and not the victim. Stay armed and stay safe.
Category: General