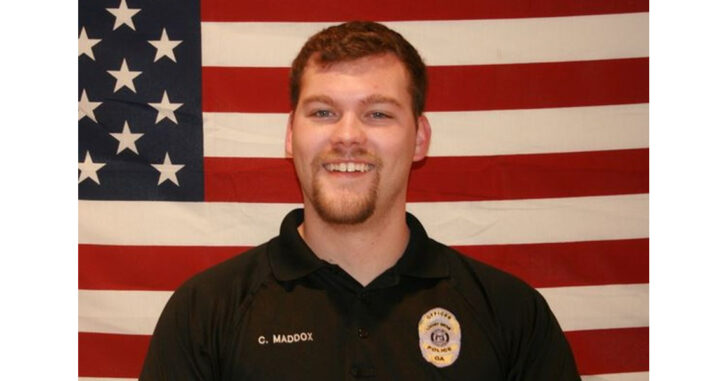 Three Henry County, Georgia, police officers were shot this afternoon while serving a warrant for failure to appear in court. Locust Grove officer Chace Maddox (above), a five-year veteran of the force, was killed while county deputies Michael Corley and Ralph Callaway were injured.

Corley underwent surgery for his wounds while Callaway was treated and released. There’s no word yet as to Corley’s condition. The still un-named suspect was shot and killed.

After talking with the man for about 10 minutes, deputies realized they would be making an arrest and would have difficulty placing him in custody, McBrayer said.

(Henry County Sheriff Keith McBrayer) did not specify what the man did that made deputies decide to arrest him instead of just serving the warrant.

That’s when they radioed for backup. According to Sheriff McBrayer, an additional officer arrived about three minutes later. That’s when the shooting started. One of the Henry County deputies shot while serving a warrant Friday morning (Callaway) has been released from the hospital, according to Channel 2. He was wearing his bulletproof vest, which blocked the bullet. A second deputy (Corley) remains in the hospital after he was shot in the stomach. He was also wearing a vest.