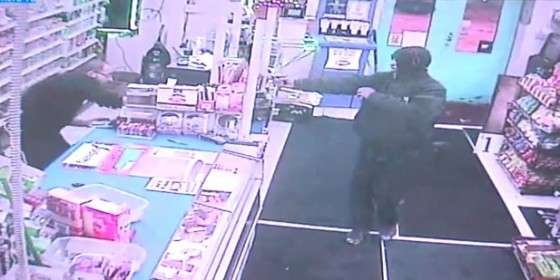 The owner of Steve’s Deli in Cleveland exchanged gun shots with an armed robber Tuesday evening after the thug came in looking for money, because he’s obviously too lazy to work.

As soon as the thug walked in, he displayed a handgun and pointed it directly at the owner, Fares Naser, who was behind the counter. Naser crouched down, fearing that the man was going to shoot. It’s a good thing he did, because the thug started firing shots.

Naser grabbed a handgun of his own that was hidden behind the counter and exchanged shots with the robber. Naser was not hit during the exchange, and it is not known if the robber was hit.

“He came in and was like give me all your money and then he started shooting at me and I shot back and tried to defend myself somehow,” said Naser.

Neighbors were not surprised at the shooting, as many say that crime is a continuing problem in the area.

Let’s hope though, that an increase in armed citizens occurs and that these thugs will finally get the idea that they won’t stand for this sort of thing any longer.