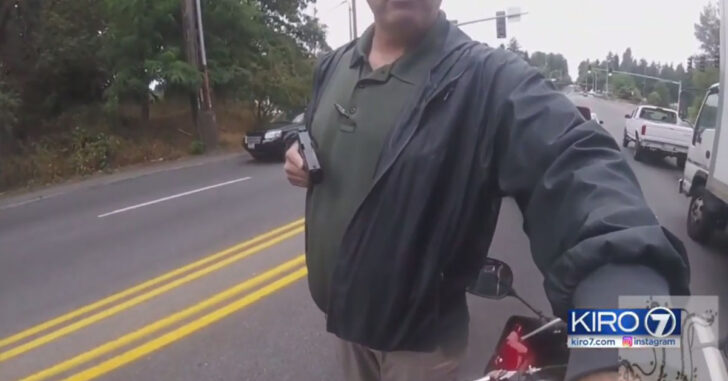 A motorcyclist, who was apparently going a little too fast, had an encounter with a man when stopped at a red light. The encounter really shook up the driver, and you can see just what happened in the video above. Local news tells us the story;

Alex Randall, the motorcyclist who posted the video on YouTube and Reddit, says the plain-clothed detective approached him on foot while pointing a pistol, and he says the detective did not identify himself, or show his badge. In the video, Randall says he stops at a red light at NE 145th Street and 5th Avenue NE, and the detective is seen on Randall’s helmet cam pointing the gun while asking, “How you doing?” The detective told Randall he was driving his motorcycle recklessly, putting people in danger, Randall said.

I am sure that the officer was truly annoyed with the supposed high-rate of speed at which Randall was accused of traveling, but it doesn’t warrant the pulling of a firearm. “I turned and looked, and he’s there with a gun,” Randall said. “I was totally unprepared for someone to be standing right next to me on the street like that.” I am not defending Randall’s actions, of course, because he would have been putting lives at risk if he was being irresponsible with his driving. While I wouldn’t speed (like that), I have to wonder how I’d handle a situation where a plain-clothed officer drew his firearm on me. Having seen no ID or any sort of confirmation, Randall had no idea who he was really talking to — and who really had a gun on him. Was this an armed robbery attempt, or was this truly an officer? In the video, there’s really no way to tell. Sheriff John Urquhart spoke out about the video, saying that what he saw was very troubling and needed to be addressed.

“That’s not the culture I want, that’s not the culture I will tolerate, and I will take swift action when I hear about it,” Urquhart said, adding that the video will be a teaching tool. “What I’m going to do with that video, is I’m going to show it to every single new recruit that comes into the sheriff’s office, and I have 70 or 80 a year. I want them to know specifically what they’re not allowed to do.”

What do you think about this encounter?
Categories: General, Irresponsible Gun Owner, News

Previous article: [VIDEO] Man Pulls Gun On Teen At Subway In Brazil For Reasons Unknown Next article: Bad Day At The Office: Robber Shot In Both Legs By His Intended Target