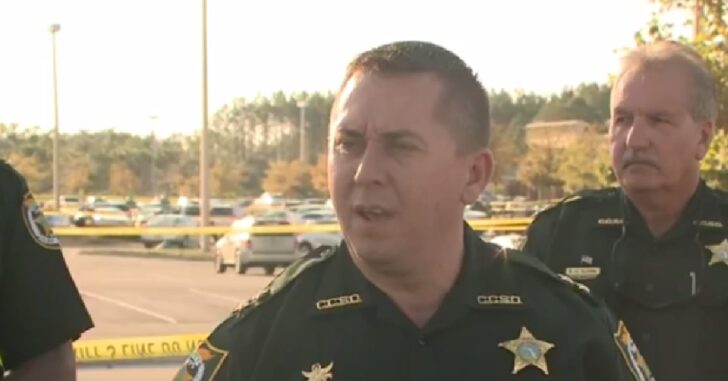 JACKSONVILLE, FL — A uniformed Customs and Border Protection agent was shot at by an 18-year-old man just outside of a Publix grocery store on Tuesday, reports The Florida Times-Union.

The young man then went and shot himself and died.

The young man, who had a narcotics warrant out on him, seems to have targeted the agent, who was literally doing nothing other than buying groceries at the time.

“He was carrying his grocery bag and caught totally off guard,” Clay County Sheriff’s office Chief of Investigations Wayne McKinney said. “He appeared to be shot from behind.”

The agent is with CBP Marine and Air Operations, according to First Coast News, and was shot several times.

However, he survived the initial incident, and was taken to a hospital where doctors gave him a “positive prognosis,” according to First Coast News.

This attack happened just before 3 p.m. It was broad daylight.

McKinney pointed out that this is the danger that comes part and parcel with being a member of law enforcement.

“It is disturbing,” He said according to First Coast News. “It’s something we live with each and every day knowing that going out in our community that there are individuals that would target us just for the badge that we wear on our chest.”

News 4 Jax reported that there were better than two dozen witnesses to the shooting, and that some of the witnesses pointed out that the 18-year-old had been driving around the parking lot before the law enforcement member emerged.

It’s like something out of “Narcos,” and I mean that in the very worst way. There is no justification for the kind of violence that was seen here.

All we can do now is stay armed, stay vigilant, and pray for the recovery of this agent who has sacrificed so much for us.