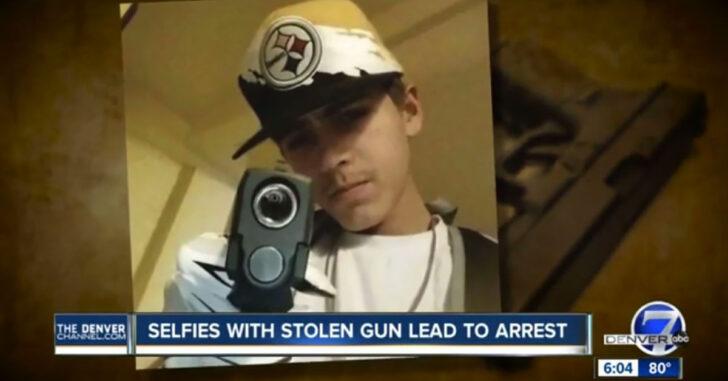 DENVER, COLORADO — The thug life isn’t for everyone, and that includes 18-year-old Viet Trinh, who was recently arrested after posting a selfie with a stolen gun on social media. Trinh is suspected of breaking into a gun shop with some friends and stealing dozens of guns. It’s a typical ‘smash and grab’ that sadly happens across the country. Many times, vehicles are used to ram into the front of the store to gain easy access. From the Denver Post;

The four thieves, each also wearing hooded sweatshirts and gloves, usedpar a rock to bash the front window. The thieves then entered the store and smashed glass gun display cases and snatched 25 guns, the affidavit says. Trinh later texted the informant to return to the Padilla home because the thieves had the guns, the affidavit says. When the informant arrived, the suspects told him they “hit a store.” There were about 10 guns, which were divvied up. Everyone got about three guns. At the time, Trinh had a Facebook page under the alias “Kyle Zimmerman.” He posted a picture of himself wearing a white and black glove, showing he was savvy enough to know he could leave fingerprints at the store.

Smart enough to wear gloves, dumb enough to post his face on social media with a stolen gun. It’s a damn good thing that some criminals are so stupid. Some gun shop owners are so concerned with the vehicle smash n’ grabs that they’re placing concrete barriers in front of their shops. It’s a shame that they need to take such measures, but it seems like it’s somewhat of a necessity with these determined criminals. As far as Trinh and Co go, they’ll be lucky to breathe fresh air in the next decade. Let’s see how their inner thug makes out in prison.
Categories: General, News