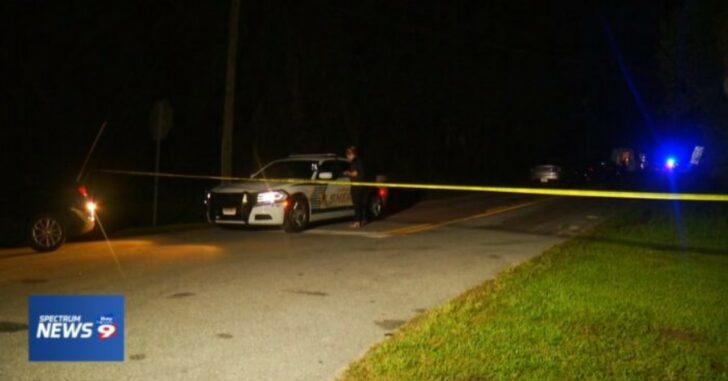 LITHIA, FLORIDA — A wife was at home with her husband and their 11-year-old daughter when police say two armed men broke into their home. They first confronted the husband, shaking him down for valuables and pistol-whipping him in a very violent encounter.

They pistol-whipped him, kicked him repeatedly in the head, and were trying to grab his daughter.

“I’ve got a fractured eye socket, a fractured sinus cavity, a concussion, 20 stitches and three staples in my head,” said [Jeremy] King, outside his home on Old Welcome Road in Lithia. “I took a severe beating.”

King said he was inside his home Wednesday when two masked men armed with guns barged in around 9:00pm. He said he doesn’t know who they are, never met them and has no idea why he was targeted.  Both men pointed guns at King while demanding money.

“They came in heavily hooded and masked. As soon as they had got the back door opened, they had a pistol on me and was grabbing my 11-year-old daughter,” he said.

Hearing the commotion, the man’s wife came out of a room to see what was happening and was immediately shot at by one of the intruders.

The wife, who is 8-months pregnant, retreated into the room and grabbed her AR-15. She opened fire on the intruders, hitting one and sending the other one fleeing.

Police would later find the shot intruder about 200 feet from the home, dead in a ditch.

The hunt is still on for the other armed intruder who got away.

Had King’s wife not reacted in the manner that she did, there is the very real chance that King would have lost his life that night, as well as others inside the home.

Looking at the address, the King’s live in a pretty remote area of town. It’s likely that the area sees very little crime, and is one of those “this kind of stuff doesn’t happen here” locations.

If there’s anything we’ve learned over the years, it’s that violent crime can touch us anywhere in the world, from the inner cities to country roads.

“Them guys came in with two normal pistols and my AR stopped it,” King said. “(My wife) evened the playing field and kept them from killing me.”