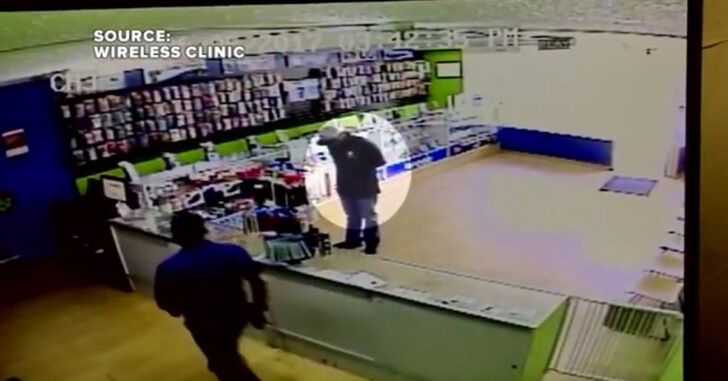 LAS VEGAS, NEVADA — A store owner was in for a surprise when a thug, browsing merchandise in his store, suddenly knocks over an entire display case and begins stealing items. That thug, however, was in for an even bigger surprise when he was looking down the barrel of the store owner’s firearm. From kron4.com;

When the man saw the gun, he immediately dropped the items and walked out with his hands up. The store owner says he actually took a gun class a month ago as part of training for a concealed weapons permit.

The store is this father of three’s livelihood, and he took the concealed carry class in order to better protect his business and his family. The downside to this story –or rather the learning experience– is that the store owner needed to first retrieve his firearm from the safe in order for him to use it. If it had been on his hip, he could have been even more prepared. If the bad guy in this case had a firearm of his own and decided to do a robbery at gunpoint, our armed citizen would have been unarmed, and there wouldn’t have been much he could have done to level the playing field. Remember; keep that firearm close and within reach, because trouble can come knocking on your door at any moment.
Categories: General, Video

Previous article: #DIGTHERIG - Gary and his Ruger LC9s in an Alien Gear Holster Next article: Man Shot To Death After Pointing Gun At The Bad Guy: What We Can Learn