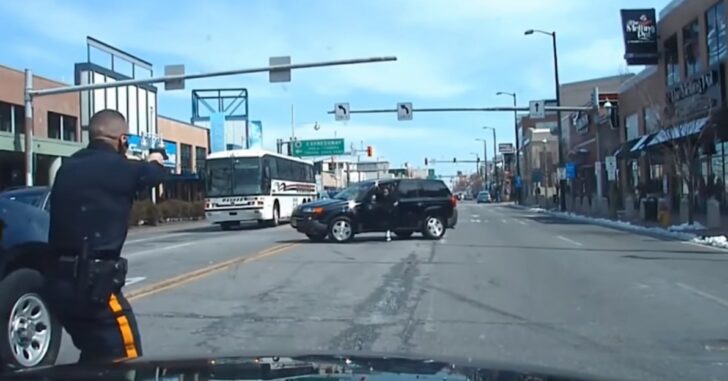 By John Boch via The Truth About Guns A reasonable and prudent person follows a police officer’s orders. Angry people sometimes show reluctance to follow lawful commands, as do the mentally ill. But add the effects of PCP to an angry nut job and things can go sideways quickly for cops and suspect alike. That’s exactly what happened in Atlantic City recently, as a police dashcam video above reveals. Antoquan Watson, 27, led police on a multi-city, high-speed chase before emerging from an SUV with a handgun. He ignored commands to drop the gun and pointed it at officers. The cops did the only polite thing they could: they lit him up as he opened fired on them. Mr. Watson soaked up a number of rounds before he went down. Even after he collapsed under a fusillade of bullets, lying on the pavement, he continued to hold onto his handgun pointed at police.  So the cops kept shooting him. He kept pointing his pistol at them. Meanwhile, they shot him some more. In the end, Mr. Watson’s bullet-riddled corpse took almost four dozen hits. Thankfully, no innocents downrange were struck, even though police officers missed plenty of times before it was all over. Watching the video, viewers can see a multitude of puffs of smoke from rounds hitting the pavement near the suspect and, no doubt, skipping. The UK Daily Mail reports that a grand jury declined to indict the seven officers involved in 2015. Clearly this incident shows that criminally inclined people — particularly when chemically enhanced — tend not not obey laws. That’s why the law-abiding need the great equalizer to defend themselves from criminals who would do them harm.
Categories: General, News, Video

Previous article: #DIGTHERIG - Oden and his Glock 19 in a Trex Arms Holster Next article: When A Revolver Trumps A Pistol