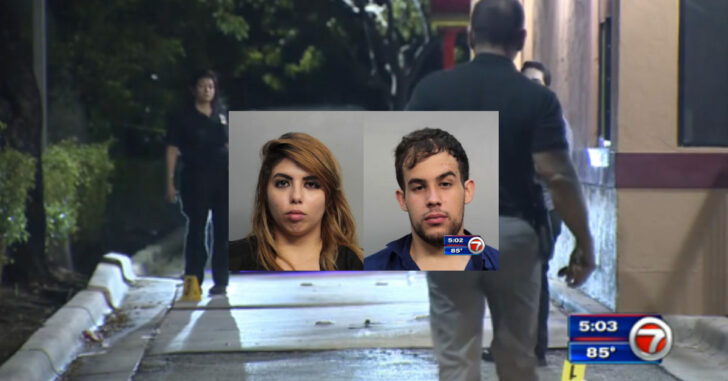 HIALEAH, FLORIDA — In a McDonald’s drive-thru, a concealed carrier was waiting to get to the teller to get his food. That was when Sergio Hernandez just walked up to the window and started chatting up the McDonald’s employee. To likely let Hernandez know that there were people waiting on their food, the concealed carrier honked his horn. That’s when Hernandez’s girlfriend attacked.

According to WSVN 7 News, Vanessa Puente, 20, rushed up to the driver’s side window and began wailing on it. He got out of the car to stop her hitting his vehicle and she began to attack him. Hernandez jumped in, punching him in the back of the head. When the driver tried to take out his cell phone to capture the incident on video, Puente allegedly knocked the phone out of his hand.

Left alone to defend against two violent attackers, the concealed carrier naturally feared for his life and took out his concealed carry handgun. He shot Hernandez once in the pelvis. Hernandez was transported to a nearby hospital and treated for a non-life-threatening gunshot wound. Puente was taken into custody.

Come to find out, Puente was out awaiting trial for an unrelated felony offense. When the judge read her charges and saw Puente present herself, she chided the young woman’s actions and even questioned why Puente would be willing to risk everything over the honk of a car horn.

“This is because people honked their horn. OK,” said the judge.

While we can’t control for idiots, this concealed carrier did a decent job of standing his ground, attempting to de-escalate, and trying to dutifully report information to the police and his insurance in the midst of an attack. The problem was that he was dealing with two highly imbalanced, violent people.

Even he likely didn’t expect that outcome based upon the event. Hernandez is probably just another scum-sucking street-level thug holding up traffic with his minor-league game antics. The concealed carrier had no way of knowing Hernandez’s girlfriend would head off a dangerous assault upon him.

This concealed carrier did the right thing, ultimately. He used his gun to protect himself after all other options were exhausted. It’s not your job to get beat upon by two strangers in a parking lot. Some people don’t want to be responsible in defending their own lives. A concealed carrier is not one of those people.

In this case, the absolute right thing appears to be happening. Fuente can look forward to a long career in charm school, aka women’s prison, and Hernandez will likely do a little bit of time for the battery charge but he’ll have a permanent reminder on his hips of the cost of being an idiot out in public.