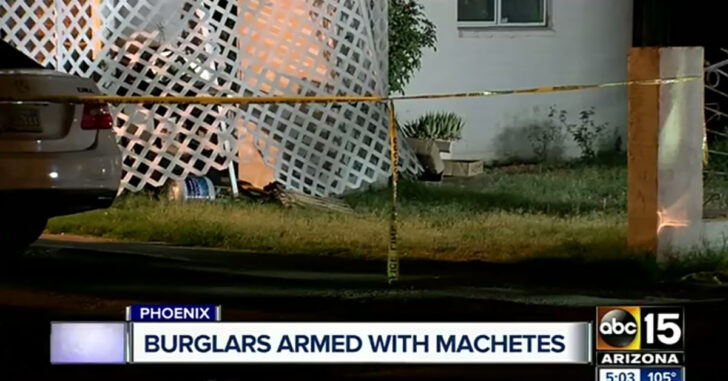 PHOENIX, AZ — A home invasion went sour for the men attempting it when they discovered, the hard way, the the homeowner inside was armed, and ready for a fight.

The call was made to police around 2:30 p.m. Police said the suspects were armed with machetes, and one was carrying a firearm.

The homeowner was able to provide a vehicle description, and the car was found near 25th Avenue and Bethany Home Road. Inside, an ‘unresponsive person’ was found. The person inside the vehicle was later pronounced deceased on scene. He has been identified as 38-year-old Leandro Torres Jr. The second suspect is still at large at this time, according to police.

Police say the victims in this incident may have been targeted because of possible legal activity inside home.

Now, it is unclear what “legal activity” was taking place that would provoke such an attack, but we are extremely glad that this homeowner was responsibly and sufficiently armed to deal with the pair of intruders.

If that home was targeted, then they sure targeted the wrong house.

Once again, we are given an example of the extreme necessity to be armed at all times, even at home. This happened in the middle of the afternoon, for crying out loud. This was a broad daylight attack.

Stay safe out there, folks. It would appear the criminals aren’t going away any time soon.

Previous article: #DIGTHERIG - Scott and his Walther PPS (mostly) in a Dara Holster Next article: Veteran Takes Hit With Firearm, Shoots Three Intruders And Makes It Out Alive