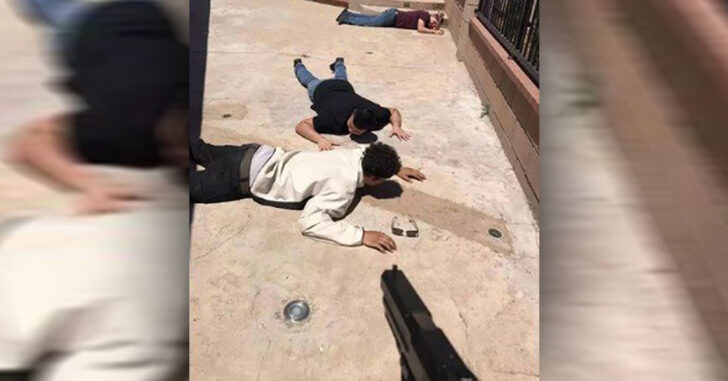 CHINO HILLS, CALIFORNIA — Who said Californians aren’t armed? Let this homeowner prove us wrong after he held three thugs at gunpoint after they entered his home as himself, wife and children were enjoying an afternoon of quiet.

Just after 1 p.m., four men between 18 and 20 years old and one juvenile entered the Zhang family’s home in the 13000 block of Gemstone Court via a balcony off the Zhang family’s back yard, San Bernardino sheriff’s officials said in a statement.

As the suspects attempted to enter the home through an upstairs door, Yan Zhang grabbed his handgun and confronted them, the agency said.

“They were home and then several kids kind of tried to pry the door open, tried to get in,” neighbor Tony Tran told KTLA. “(Zhang) got a gun so he fired a warning shot and was able to apprehend them until the police showed up.”

While Zhang’s family got to safety and a neighbor called police, the suspects waited on the ground and contemplated life while looking down the barrel of an armed citizen refusing to take their crap.

Images of the incident were posted by Zhang on a Chinese website and can be seen here. While three of the suspects were held at gunpoint, another two were able to flee. However, they didn’t get very far. Neighbors helped police locate the other two, who were also arrested.

Armed citizens ready to defend themselves in California? You betcha. Whether this armed citizen could carry concealed is not known, but at least he was able to have a firearm at his home to defend himself and his family.