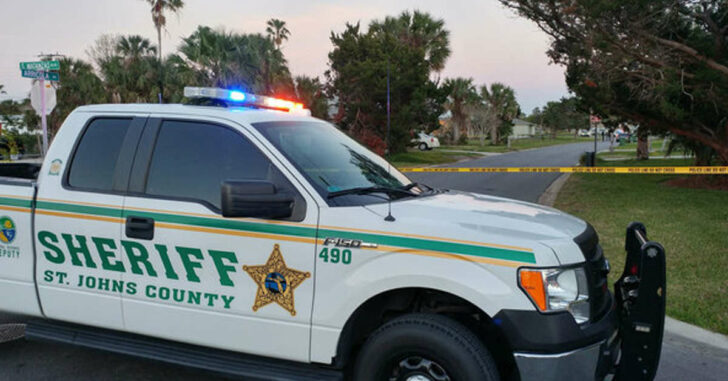 SAINT AUGUSTINE, FLORIDA — When her sister gave her a frantic call, one woman and her mother quickly rushed to her aid. The sister’s boyfriend had apparently gotten into a physical confrontation with her and would not leave the premises. Despite having a prior trespassing warning against him, Jeffrey S. Lee, 29, decided to stay at the apartment until the mother and daughter arrived.

According to Jacksonville News 4, Lee proceeded to get into a confrontation with the mother when she told him he needed to leave. That is when the daughter pulled her gun and fatally shot Lee outside the apartment.

“They quickly took the female into custody for their safety, and her safety, that type of thing, then started the initial investigation,” SAPD spokesman Mark Samson said.

While a preliminary investigation is still underway, police are looking at this case as one of self-defense. Before the county prosecutor can make that determination, however, they have to do a full review of the evidence to ensure that the killing was justifiable.

“It very well could be (justified) and that’s why it takes time to do the investigation and get into the apartment the legal way — collect that information and whatever evidence they can collect and get it to FDLE and study it there then tie the whole story together and come up with a conclusion at the end of it,” Samson said.

Under Florida Law, citizens are allowed to exercise ‘Stand Your Ground’. That means that so long as a person has every legal right to be there, he or she has no duty to retreat from a threat. Coupled with the definition of justifiable homicide that includes stopping a violent felony, this gun owner is well on her way to establishing a case of self-defense.

She’s not out of the woods, yet. As traumatic as the event likely was, as painful as it is to live with the consequences of taking another person’s life, she still has a way to go before her life can return to normal.

It’s a long process. And that’s why law-abiding gun owners take that responsibility to defend themselves and their families so seriously. It’s not just the commitment to physically defend one’s self and others, but the fortitude to get through the psychologically and financially daunting process of a homicide investigation.

Don’t let that dissuade you. In cases like this, a warning will not do. When a full grown man is beating on someone’s mother, it would be foolish to think that person wouldn’t step up and use force to ensure her safety.

Carry every single day, everywhere you can.