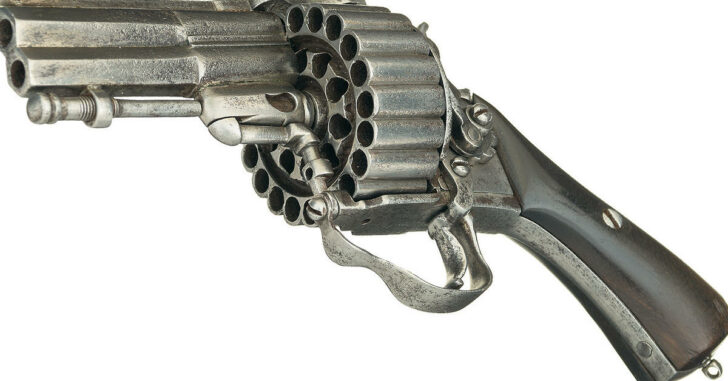 When it comes to modern handguns, there’s not too many real ‘bad choices’. Most firearms are reliable enough to shoot so long as they’re properly maintained. However, in this article, we’ll go over some of the worst criteria when it comes to choosing what handgun is best for you.

…And, in full disclosure, I’m also delving into my own indiscretions that I’ve personally made in my own handgun purchases.

‘Blinded By The Hype’

It happens. When a new gun hits the market, whether it be at Shot Show or any number of other national or regional events, people tend to ‘ooh’ and ‘aaahh’. Even us gun reviewers can be prone to personal prejudices which may blind us to a gun’s shortcomings in a certain set of environments.

A great example of ‘hype’ is the Taurus Curve. Chambered in .380 ACP, it marketed itself as a great solution for concealed carriers who didn’t want to lug around an inside-the-waistband holster and just wanted a very basic gun for personal protection.

And you know what? For some, the Taurus Curve WILL be a great answer for them. However, by and large, it is a very niche gun that’s really only a good choice for a small subset of people. It’s a gun you should really fire at the range first before deciding to purchase.

Lesson: Don’t choose a gun based upon its marketing.

If you watch popular television and movies, you’ll notice characters carry quite a variety of flashy, good looking handguns. Let’s take The Wire (2005) as an example. Law enforcement seemed to have a love for the Glock 17. Whether those were modeled after the actual guns issued to Baltimore Police or the show just decided to use them as the standard carry, I’m not going to dig deep enough to find out.

Glocks are great guns but they’re not ideal for everyone. Some people need a gun that’s a bit slower on the trigger and others end up really liking the pull of a double-action only. Relevant picture below. People attach to characters and sometimes see themselves in those characters. Hopefully, not too many of our concealed carry readers mirror themselves after Pryzbylewski from The Wire.

But fiction is not reality.

They can mirror each other at times but we should never base our own personal defense on what we see on television. If that worked, then I’d definitely be John Wick. I’m not. I don’t intend to be in any situation John Wick was in and I certainly wouldn’t have flawless performance in those circumstances. If I picked any of the guns John Wick used, they probably wouldn’t compliment my choices for a daily carry.

Lesson: Just because it looks cool on TV doesn’t mean it will help you in real life.

‘My Significant Other Said It’d Be Perfect For Me’

Opinions are like mouths. Everyone has at least one and they’re usually filled with hot air. That’s not to say someone can’t recommend for you the gun of your dreams. Gun shop owners will constantly try to, that’s for sure. Internet talking heads — such as myself — certainly will continue to.

People are subjective. Yes, even me. We have our own viewpoint. There are things that go through my head that are probably not sane or rational to another human being. I, however, can pick a gun just fine for myself. That gun works exactly as I need it to and I feel confident using it in a safe environment.

And you should be, too.

Just because your aunt, uncle, sister, or husband tells you this gun is perfect for you doesn’t mean it is. Your everyday concealed carry gun has to be something you are utterly confident in.

This means the tried-and-true methodology will always work:

These four things are going to tell you a lot about whether a gun can functionally work as your everyday concealed carry handgun. If you feel confident shooting it, your shots are consistent, you feel confident swapping magazines, you can take apart the gun safely for basic cleaning, and it fits well in a holster — bingo. You’re on your way.

Lesson: Test out a gun before you commit. Don’t let someone else tell you what’s best for you.

‘But It Looked So Good!’

There are plenty of sharp looking guns. I, for one, have a love affair with the Sig Sauer Legion P226. It’s not at all in my price range but it’s a pistol I love to shoot. In terms of everyday concealed carry, I would go with something slimmer based upon my own stocky frame and my daily routine.

If I picked up a Legion P226, I would undoubtedly love and adore that gun. Whether that love and adoration would carry over into concealed carry — a whole subset of different considerations and conditions — I’m unsure.

When you’re in the market for a gun, don’t let good looks fool you. You know what you need and what you can feasibly carry. Just like some people would feel woefully unprepared to defend themselves if they carried a .32 caliber L.W. Seecamp, I would feel completely out of place carrying an IWI Desert Eagle .50 cal as my everyday carry.

Some states have specific laws on ‘printing’ and ‘showing’. Those are also considerations.

Don’t buy a gun for its looks. Buy it because it has a purpose — for you — for concealed carry. Otherwise, you’ll just end up with a sharp looking gun that stays at home.

Unless a close personal relative is selling you a very good handgun at well below market value, there’s no such thing as a new, reliable, good gun for under $200. It arguably doesn’t exist. The Yankee Marshal disagrees and he states his case for this. Feel free to yell at him (or at me in the comments section).

You may be able to pick up a really good gun at something like a gun auction but in terms of ‘New In the Box’ (NIB), there is no gun I would trust to save my life that costs less than $200.

That’s not to say money equals quality. That’s not necessarily true. A basic Glock 19 can cost as little as $450 NIB and I would trust it to work as hard as guns that cost twice as much.

But for those who nitpick on price, have a little common courtesy for yourself and the manufacturer and price your own defense a bit higher. If it means saving up for a month or two, do it. It’s worth it and you’ll appreciate it if you ever need to use that gun in any setting other than a range.

People end up with cheap guns because of a failure to plan. That’s an avoidable mistake.

In conclusion, I wrote about a few of the reasons I see people often end up with the wrong gun. There’s quite a few more, undoubtedly, but I felt this addressed many of the things I see or have, myself, experienced. If you think of some other good ways to wind up with a bad gun, let me know in the comments section below.