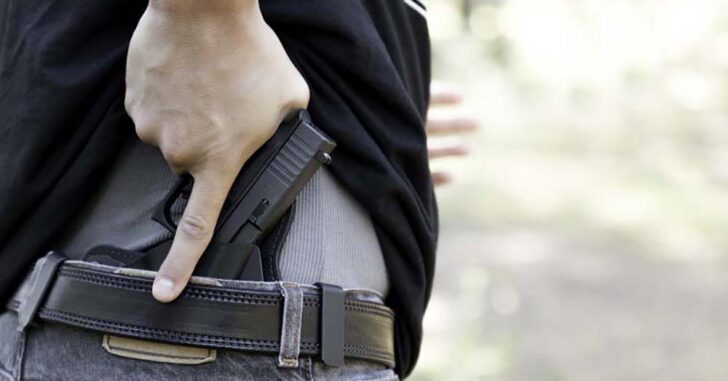 Carrying a loaded handgun on your person is no trivial matter. People who are new to this endeavor typically have some understandable anxiety. I have also seen far too many experienced carriers become careless, as they often become so accustomed to carrying a gun that they forget to strictly abide by proper safety measures. The reality is that a handgun is a very dangerous tool, but it can be carried on your body in a perfectly safe manner as long as you are willing to build the appropriate habits into your daily routine.

Use a Good Holster and Belt

Before going any further with the discussion of how to safely carry your handgun we need to address two pieces of gear that are a must: a properly designed holster and a good gun belt. If you don’t want to invest in these two pieces of gear my advice is to re-consider carrying a gun. To safely carry a handgun on your person the weapon needs to ride in a holster made out of kydex or leather that is form fitted to the individual firearm model. The generic one-size-fits-all holsters do not safely retain a handgun, and holsters made out of cloth materials are a no-go. Fabric holsters do not retain a gun properly. A holster should tightly retain the firearm and should completely cover the trigger guard of the gun. This will insure that no matter what activity you are doing the gun will remain safely in the holster and will not discharge. The holster should also securely affix to the belt via loops or clips.

A dedicated gun belt is also needed as these are designed to be rigid enough to hold the weight of a holstered handgun. Regular belts are typically too flimsy and your holstered gun will shift around throughout the day making for a less-comfortable, as well as less-safe, situation. A dedicated gun belt made out of leather or nylon works well and you can find both casual and formal designs to accommodate any dress requirements.

To avoid having a negligent discharge my first advice is to minimize the handling of your weapon while it is in a ready state. Obviously you may handle your gun administratively or for training quite often, and this is perfectly safe as long as you follow the rules of safe gun handling. However, you should minimize the frequency of handling the loaded and ready gun during the times that you are distracted.

If you put your gun in your holster when you leave your home, the gun should stay there until it comes off again at night, or at least until you return home. There is no reason to access the weapon while out and about, except to use it in self-defense of course. If you must remove your gun and lock it in a secured container in your vehicle when entering restricted areas, be sure to do so safely, without distraction, and re-holster the gun safely upon returning to your vehicle. Some prefer to use holsters with clips that make the removal of the gun while in the holster possible. This works well as long as you verify that the quick-detach clips reliably hold onto the belt when drawing the gun.

I have seen many surveillance videos showing negligent discharges and this has been enlightening to say the least. I have seen an individual remove his gun from its concealed holster in an elevator, for no apparent reason, and then accidently torch off a shot to the great horror of the woman in the elevator next to him. Fortunately nobody died. I also recall a recent video of a guy who shoots his own finger off when removing his loaded handgun at a gun store in order to compare his current carry piece to some other handgun in the rack. Don’t do unnecessary gun handling in public places. Don’t take your carry gun out to show your friends at the barbeque. Gun handling should only be done under controlled circumstances. There is never a time appropriate to remove your gun from the holster when in public except in the event of self-defense.

If in a proper holster a handgun will not fall out. However, other human beings can lift the gun out, if they know it is there. If you open carry a handgun then I believe you absolutely must use a retention holster, which is a holster with a locking mechanism to prevent unauthorized access to the weapon. For concealed carriers this is less of a concern since nobody else should know you are armed and a properly form-fitted holster should suffice. However, even for concealed carriers, there are retention issues that should be considered.

One area of concern for many is small children. I have two small sons, so trust me, I get it. They climb all over me like monkeys. The first line of protection is, of course, the proper holster. While wrestling on the floor with your kids, or running across the yard playing ball, the holster needs to retain your gun during such activity. When wearing the gun concealed there should be little jeopardy of a child trying to grab the gun, but caution is still in order. A general sense of awareness of the weapon is warranted for anyone who carries on a daily basis. Any attempt to access the holstered gun, whether by an adult adversary or just an innocent child who has somehow discovered it, should be met with your immediate action to trap the gun in place. If it is truly a concern using a retention holster even when carrying concealed may be added insurance that the gun will not come out unintentionally.

Developing a sense of protectiveness for the region of your body where you carry your gun should become natural. If you carry strong side hip, develop the habit of protecting that side. For example, if sitting with friends at a restaurant, I always choose to sit with my gun side away from the individual next to me, if I have the choice. If stuck in between people then you will not have that choice. Likewise, if I hug a friend I will keep my arms hung low, so that they put their own arms high, so that no contact is made with the weapon, which may be felt as a conspicuously hard spot on the waistline. Such habits may sound vexing, but they will quickly become second nature, and further insure the safe carry and concealment of your handgun.

Previous article: Permitless Concealed Carry In Utah Dies In House Committee Thanks To Lobbyists -- Better Luck Next Time, Utah Next article: The Concealed Carry Package: What Items Do You Really Need To Have?