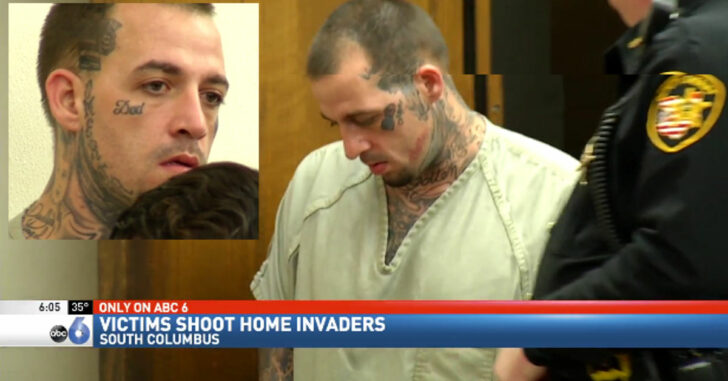 COLUMBUS, OHIO — An armed robber and an unnamed accomplice approached the back door of a family’s home and pretended they needed to use the phone because of car trouble. Taking advantage of the homeowner’s kindness, the main assailant waited until his back was turned and then hit him in the back of the head with a gun.

Down goes the homeowner and the two suspects rushed into the home and cornered the woman of the house. They took $1,000 in cash from a safe and then wanted to take her down to a back bedroom where her two children were located. That’s when she realized she couldn’t wait any longer to fight back.

“I know there’s a damn good chance we’d be dead right now if I hadn’t grabbed my gun like I did,” the mother said. “My immediate life was in danger so I shot.”

She shot the main intruder in the torso and him and the other suspect fled out through the back door. An exchange of gunfire occurred as the suspects returned fire at the woman, who was defending her home, husband, and children.

Both suspects ended up in the hospital. The main perpetrator, Allen Thompson, was arrested at the hospital while he was getting treatment for his injuries. Police haven’t released the details of how many times he was shot. His bail was set at a quarter million dollars.

Due to the fact his accomplice is left unnamed and police don’t appear to be hitting him (or her), I’m guessing that maybe the accomplice is willing to testify against Thompson? Who knows. Criminals don’t really have that much loyalty for one another so stranger things have happened.

The shock of being stuck in a life-or-death situation where you have two armed intruders in your home, hurting the ones you love, and threatening your children… That’s a hard thing to deal with. It’s natural for people to want to lay low and hope the trauma is minimized. But this woman understood that even after handing over her hard-earned savings to these criminals, they were going to want more. And if that more included her children, it was too much.

We all have a breaking point.

Her kids were hers.

She did what she had to do to defend herself and her family — and that meant taking the fight to the bad guys. It’s a great day when, despite the loss of $1,000, the family is able to sit together at the same table.