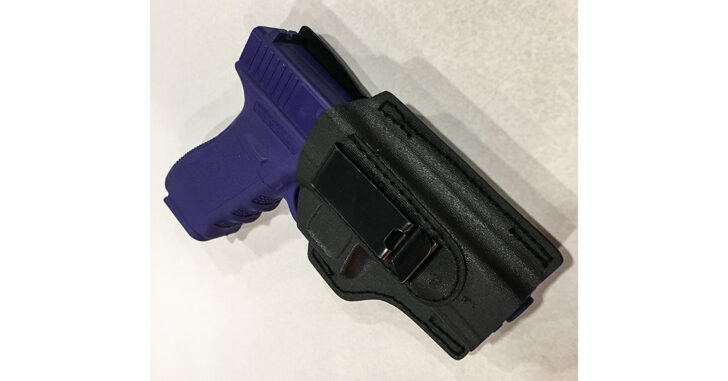 Safariland is out with a couple of new concealment options this year that are both wallet-friendly and give you a little something different than most of the other products already on the market. Let’s start with their new Model 17 IWB Inside-the-Waistband Concealment Holster.

If the Model 17 doesn’t look like Kydex, that’s because it isn’t. It’s a similar material they call Boltaron and it has a couple of advantages over Kydex. First, it’s thinner. It looks like about half the thickness of a typical Kydex holster which should make for a slimmer profile. Second, while it’s also a thermoform material, it’s less sensitive to temperature extremes than Kydex, both at the high and low ends of the spectrum.  Note: that doesn’t mean you can leave it on your dashboard in Phoenix on a July afternoon. Just like Kydex, it will still deform into something that looks like a puddle. But it’s less likely to melt down than the more popular material.

We don’t know if Boltaron is any less expensive than Kydex, but the good news is that the Model 17 is a bargain. Safariland’s pricing the holster at a very affordable $38.50 MSRP. They’re also offering a tuckable version with adjustable can’t — the model 17T — for the same price.

If you like to carry a semi-auto with a light slung under the barrel, Safariland has you covered there, too. Their new Model 557 Open-Top Belt Slide Concealment Holster is a hybrid belt-slide design with a thermoplastic (they call it SafariLaminate) body and flexible, leather-like “wings” with the belt holes that conform well to your body for better concealment under a cover garment.

The unique feature here is that you don’t have to have a light mounted to use the holster. If you put your light-less pistol in most holsters that are designed for pistols with a light mounted, the gun will rattle around with virtually no retention. Not so with the Model 557.

Safariland has added a small detent at the ejection port that holds your pistol in place either with or without a light. Another great feature is the 557’s price: $50.00 MSRP.