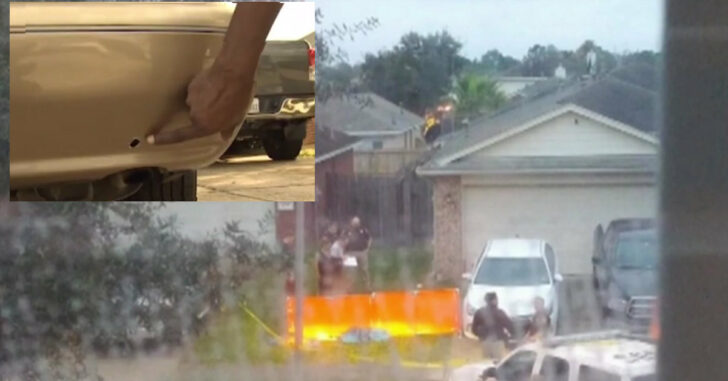 FORT BEND COUNTY, TEXAS — A homeowner was forced to shoot a thief who he caught breaking into his truck in his very own driveway. The homeowner first discovered the thief when he saw him on his home security surveillance system. He went out and asked the thief to stop. The thief moved a hand towards his waistband and that’s when the homeowner fatally shot him.

According to Houston police investigating the scene, they told KHOU News that the homeowner was well within his rights to use deadly force. The 18-year-old suspect was pronounced dead at the scene and neighbors are still reeling from the incident.

“The bullet hit the bottom of this bumper right here and they had to retrieve the bullet out of there,” said one neighbor, who showed KHOU News where a round made impact on his vehicle. “I feel lucky it hit the bumper versus shattering a window.”

While surprised to find a bullet in his bumper, the neighbor told KHOU News that he understood what his neighbor was doing.

“I am sad about my car but you know we gotta look out for each other here because there have been a lot of break ins here.”

I love seeing stories where the homeowner has a home security system. Versus heading outside to address a bunch of unknown variables, a home security system allows a homeowner to see what’s happening on his property. This means, should he choose to go outside and defend his property and himself, he at least has some idea of what he’s dealing with.

Now, if you see someone breaking into your vehicle or messing with your property, the first thing I normally suggest is notifying the police and letting them handle it. Not everyone feels confident to head outside and deal with a potentially armed, violent person. And if you don’t have to do it, you shouldn’t. That’s just simple defensive mindset that we continually hammer home on a website dealing with responsible concealed carry and gun ownership.

That said, if you do, please do prepare yourself accordingly.

This homeowner brought his gun and offered the man an option to leave. Bad guys don’t like being told what to do and they don’t like being interrupted while they’re doing it. For an 18-year-old thug who didn’t know any better, he couldn’t have picked a worse home to pull this sort of mess.

Thankfully, the homeowner was prepared and he defended himself accordingly.

Defensive gun use. It’s what keeps the good guys breathing and makes sure the bad guys have to really think about what they’re trying to do before they do it.