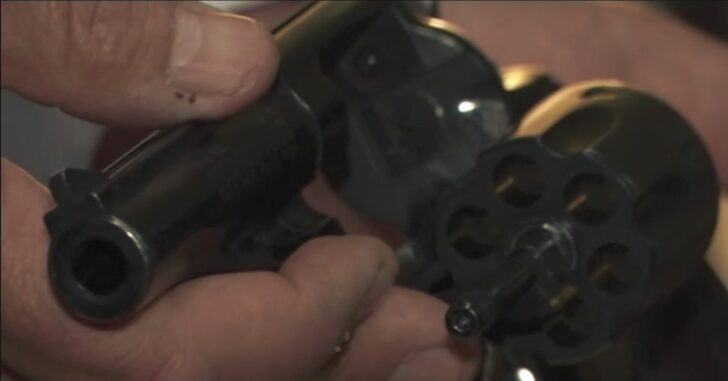 Many see the guns as a badge of veterancy on the police force.

“Whenever they see the gun, they realize that I got a lot of time on patrol and that I’ve done a lot of things and they give me great respect because of it,” says Lt. James Darcy of the NYPD’s Housing Bureau according to New York 1.

But even so, they gotta go.

I love 6-shooters — one’s on my hip as I write this. That being said, in terms of keeping America’s largest city safe, it’s probably for the best.

The sidearm dates to the late 1800s, when Teddy Roosevelt oversaw the city’s police force, and ordered a .32 caliber Colt to be the department’s standard gun. Officer Steven Cohn, of the NYPD’s Counterterrorism Bureau, still carries the .38.

In 1993, after a fierce debate, the NYPD switched from six-shot revolvers to make a 9 millimeter semi-automatic its standard gun. The semi-automatic can fire many more bullets is easier to reload. Officers packing the old revolvers were allowed to continue to carry them.

But after decades of retirements, just 29 cops still do. And now, Police Commissioner James ONeill has ordered them to hang up the old six-shooters by Aug. 31. The 29 officers are spending three days at Rodman’s Neck, the police firing range in the Bronx, learning how to use their new weapons.

I’d imagine those officers already have a pretty fair idea how to operate their new service pistols, and they actually have some choice in what they carry. According to Range 365’s Stacy Bright and David Maccar, officers can choose from the Glock 17 Gen4, Glock 19 Gen4, and the Sig Sauer P226 DAO.