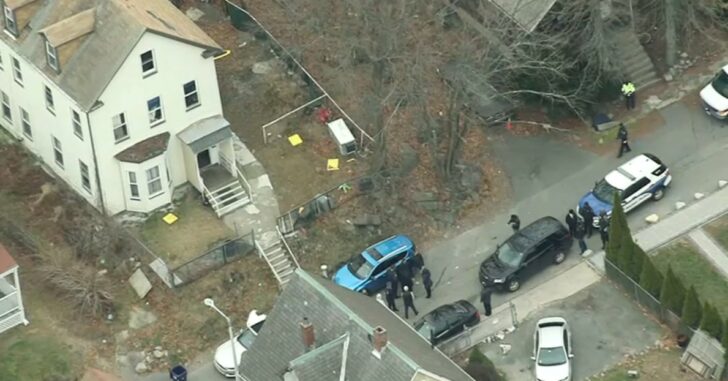 BOSTON, MASSACHETUSETTS – A dog that was severely mauling an 11-year-old boy was shot dead by an off-duty Boston police officer who heard screams and responded immediately. The attack took place just after noon on December 30th, in the backyard of an apartment building at Rock Terrace Way near Davidson Avenue, according to officials.

Hearing screams in the Dorchester neighborhood, the off-duty officer radioed for help and jumped several fences to reach the scene where a pit bull was violently attacking the child. “Fearing for the child’s safety, the officer discharged his firearm, halting the attack,” said Police Commissioner William Gross.

The boy was rushed to the hospital with injuries to his neck, arm, and groin. The unidentified officer was also transported to the hospital for unspecified reasons. “If it wasn’t for the off-duty officer, this child would be dead,” commented Suffolk County District Attorney Rachael Rollins.

The deceased dog and another pit bull were taken from the property later in the afternoon. “The child was in his backyard being attacked by a pit bull. And we are hearing that another individual was holding another pit bull, preventing that dog from joining in on the attack,” added Gross.

Police say the incident is still under investigation. The relationship between the dogs and the child was not disclosed, but police did say that they have been called to the house on animal complaints in the past.

According to a neighbor who provided video to a local media outlet of the dogs running through the street with leashes dragging before the attack, the dogs were “loose all the time,” adding, “I’ve seen them when they were outside, and they were trying to attack other people too.”

As concealed carriers, we probably assume that if we are ever forced to use our handgun that it will be to defend ourselves or family members from other humans; however, we may be called into action by the screams of a defenseless person and find it necessary to dispatch an animal. This can be a very stressful and tactical situation, as ineffective ammunition or poor shot placement may only serve to agitate the animal into a higher state of aggression.

Another more important consideration is that a round fired from your gun may strike the very person that you are attempting to save from the animal. In a situation such as this, the animal may be moving not only it is body but the body of the victim as well, making it difficult, if not impossible, to fire a shot that will be effective in stopping the attack without harming the victim. Regardless of your intent, if you injure or kill a person with your actions, you can expect criminal charges and civil lawsuits.