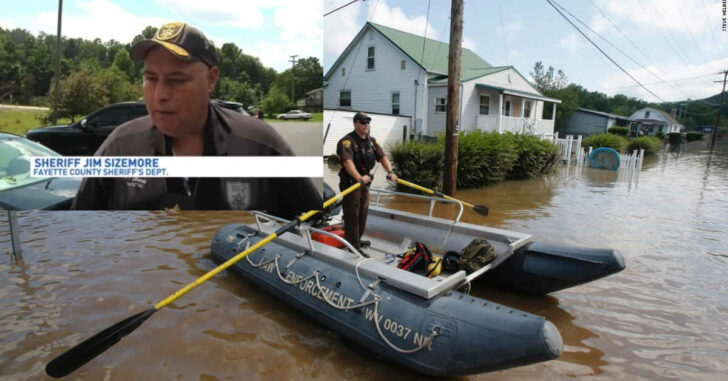 FAYETTE COUNTY, WEST VIRGINIA — Terrible flood waters have ravaged and wrecked so many people’s homes in Fayette County in recent weeks. In the midst of the destroyed homes have been multiple reports of looters looking to make a quick buck off this tragedy. Neighbors throughout those affected communities realized that those who prey on people at their weakest deserve little mercy. They’ve formed armed neighborhood patrols to keep looters in check.

As the Sheriff of Fayette County said to WCHS 8 News, if a looter gets caught by an officer of the law — it may just be his lucky break.

“If you decide to loot and steal from people who have already been ravaged by these floodwaters, you will be lucky if we’re the one to catch you,” warned Sheriff Sizemore to looters.

He continued on to warn those who were not from this area to stay away for the time being.

“If the residents of this area catch you first, you may not make it to jail. If you are not a resident of this area and don’t have family members in the area you are trying to help, you need to stay out of this area.”

It’s a stark reality for those who feel they’re being preyed upon by lurid opportunists. As hard emotionally as it is to watch your entire life get pushed away by raging floodwaters, it’s a double blow to watch people crawl out of the woodwork to start picking through your few remaining possessions.

Forming up into armed neighborhood watch groups is a natural tribal way of protecting people and what little remains of their homes. It would serve any criminal well to remember West Virginia is not a state to idly pick through another’s property.

As the floodwaters recede, hopefully those who band together will take note of their numbers and continue to aid each other. The idea of citizens grouping up to protect each other’s interest is, at its core, one of the ideals of any well functioning society.

We cannot predict the weather or what tumultuous disasters may come — but working together within our local community and taking that responsibility is a great undertaking.

Stay vigilant, watch each other’s backs, and help out where you can.

Previous article: ISIS Has A Hit List: This Woman Is On It, And The FBI Came Knocking And Said 'Arm Up' Next article: SHOCKER: More People Want To Carry Firearms After Orlando Attack