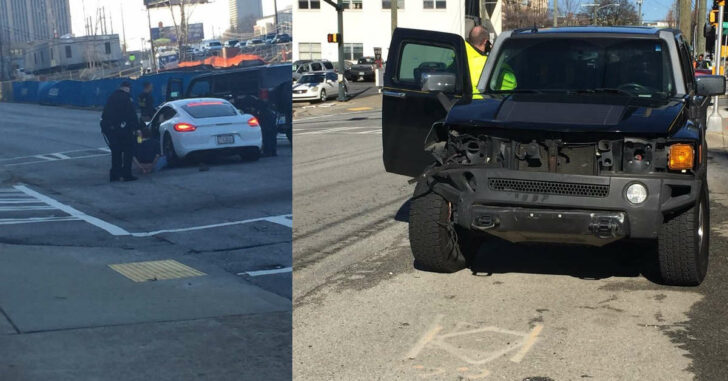 ATLANTA, GEORGIA — Fleeing from Atlanta police, a black Hummer swerved in and out of congested Atlanta traffic, hitting up to eight cars along the way. His vehicle battered and the police gaining ground, the driver of the vehicle decided to jump out and commandeer a white Porsche. When he got up to the window of the Porsche, however, he discovered the other driver was armed.

In a slow trickle of information, Atlanta Police released that the driver of the Porsche shot the suspect fleeing police. According to the Atlanta Journal-Constitution, the suspect attempted to carjack the Porsche after his own black Hummer was too beat up to make it any further.

After the driver of the Porsche shot the suspect, police quickly caught up on foot and deployed tasers onto him. He was taken into custody and brought to Grady Memorial where he was treated for a non-life-threatening gunshot wound.

No information was given as to what the suspect was fleeing from or where he was attempting to go. In the course of his drive through Midtown, he damaged up to eight vehicles. His identity has not been released by the Atlanta Police.

Wow. Do you think the Porsche driver thought he’d get stuck in this sort of situation when he left his driveway?

My guess is probably not.

There is no way of knowing what sort of ridiculous or violent antics may come barreling our way. All we have to work with is a basic situational awareness of what’s going on around us. That’s it.

Thankfully, this driver had a gun and was able to use it. He won’t be charged with anything because it was pretty clear he was defending himself from a crazed criminal set on assaulting him, taking his car, and potentially assaulting his passenger.

Clear, serious risk. All of this in broad daylight on a Thursday.

It can happen anywhere, any time, any place. It’s our job to be prepared. If you carry your handgun with you everywhere you go, you’ll be one step up when it comes to dealing with whatever real life decides to drop on your lap.

Carry your handgun every single day, everywhere you go.