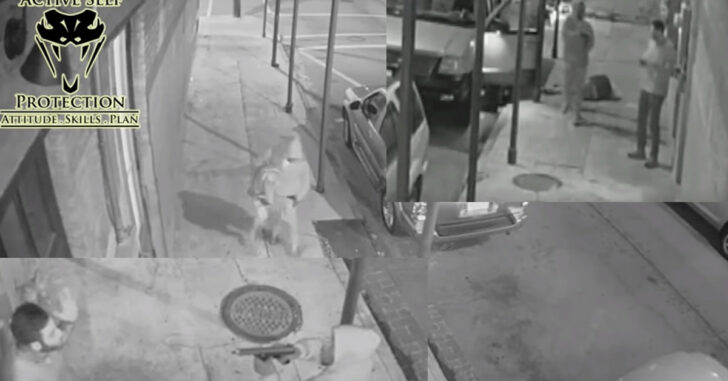 In a recent video released by Active Self Protection, they review video surveillance footage of a Tulane University medical student stepping in to stop an armed kidnapping of an unconscious woman. This all happened in downtown New Orleans in the dead of night.

The armed kidnapper obviously wasn’t about to back down from an unarmed civilian stepping into business he had no part of.

For reference, if you see a violent felony taking place — especially a kidnapping — call 911 immediately.

This medical student stepped in thinking he was doing the right thing.

You’ll watch him. He gets shot by the thug. Worse, the thug shoots him once in the abdomen to take him down and then tries to shoot him in the head point blank.

Thugs don’t understand guns so he tried to rack the slide and fire again.

That lucky medical student got saved by a thug’s ignorance.

He almost lost his life due to his own ignorance.

We react to situations as we see them and as we think we know best. Hopefully, with a basis in the law and understanding a few simple principles in human dynamics, we can learn to avoid a similar fate if we get stuck in a similar scenario.

Lesson 2: If you do decide to step in, don’t do it unarmed.

Violent criminals only understand one thing: force. He who’s stronger, lives. He who isn’t, doesn’t. You didn’t pick the music but if you’re going to step into it, you better learn to dance. Hopefully, you practiced.

Lesson 3: Don’t attempt to do close quarters negotiation with an armed criminal.

Use distance, cover, and concealment to give yourself the best chance of putting rounds on target and give him the least chance to put rounds on you.

It really doesn’t matter if you think something is a good idea or not. It means absolutely nothing if you think the better nature of mankind will shine clearly at 3 a.m. on a side-street in New Orleans, Milwaukee, or Baltimore. These things mean nothing to anyone — least of all the armed criminal you’re attempting to intercept as he feeds on his prey.

Lesson 5: If you’re being held at gunpoint, you already lost.

If the bad guy has his gun at you, you lost. Sorry. Life isn’t fair. There’s no guarantee he’s going to show any mercy. This thug didn’t. He racked his slide and tried to shoot again.

You may fight and die as well as fight and live. Your choice. No one can make it for you. Not us here in internet land and not anyone else around you. That’s your call. Make peace with it.

When we see videos like this, we learn important lessons. It also reinforces the mentality of training as we intend to fight. Next time you’re at the range, try shooting on target with your hands up and your concealed carry gun holstered. It will give you a better idea of how you’ll fight when your back is up against the wall.

Do the right thing.

Train how you intend to fight.