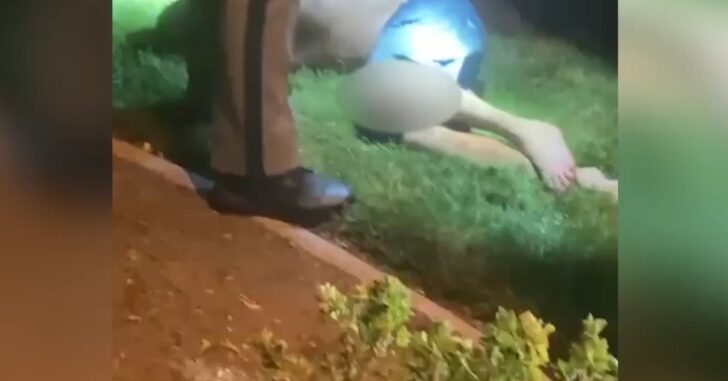 LAS VEGAS, NEVADA — David Valle broke into a West Vegas home where he threated the family by saying “Let me in, and I will kill you all.”

The police received a burglary call around 05:30 am, and when they arrived they found Valle and arrested him. According to the police report, Valle had broken into the house and was attempting to break into the home’s second story master bedroom.

The family, whose name has been redacted from the police report, woke up to a loud breaking noise. The husband was told by his frightened wife to call the police. They then barricaded their bedroom door as they also had their daughter in their room, the man went to a safe and retrieved his firearm.

Once armed the man then warned Valle and told him to leave. Valle responded with “Pistola” and continued to try and break into the room. Valle at the time was armed with a knife and shirtless. The homeowner then fired a warning shot into the ceiling but Valle didn’t stop. The man then shot Valle through the door hitting him in the knee.

Policed arrived on the scene and heard a gunshot. The officer kicked in the door and announced himself as a metro police officer. The police heard screaming and yelling and ran up the stairs. He saw Valle with a bullet wound in his knee. Valle was pulled from the home writhing in pain. “The aftermath of the shooting was caught on video, with a neighbor recording footage of the wounded man writhing in pain on the lawn after being brought out of the house by police.”

“I think everybody’s kind of shocked about what happened,” said Heath Horvat, 50, the next-door neighbor who recorded the video, speaking of the bizarre incident in the usually quiet, tight-knit neighborhood near West Sahara Avenue and South Hualapai Way.

Valle was taken to a hospital with a shattered tibia. Once being treated Valle was charged with burglary with a deadly weapon and three counts of assault with a deadly weapon, according to the arrest report, but Las Vegas Justice Court records show that prosecutors declined to pursue the assault counts.