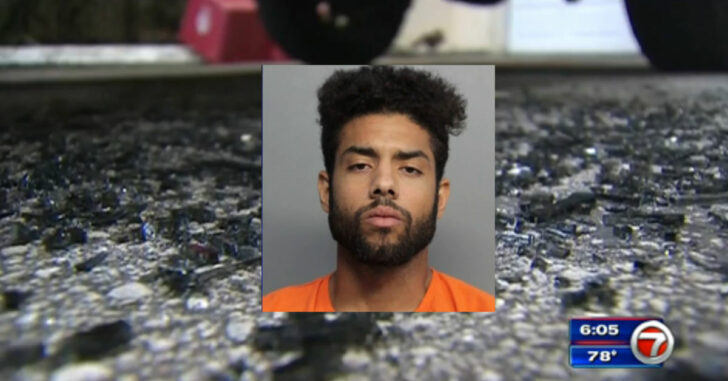 CORAL GABLES, FLORIDA — When a homeowner heard a loud banging on his front door, he initially thought a strange man parked out front with a van may have had the wrong address. However, when he saw the man had a tire iron and continued to bang on the door, his first thoughts were towards his family’s well being.

“Guy banging on my front door. We don’t know who’s banging on our front door. We couldn’t see them from the second floor,” the homeowner said. “I thought maybe they had gotten the wrong house or something. They were waiting out to see if someone answered the door.”

He got his gun. Unfortunately, Elides Serene Alvarez, the main suspect in this case, decided to exacerbate the situation by smashing in the window of the homeowner’s truck with a tire iron. The homeowner headed outside to confront both the passenger in the van and the man smashing his property and threatening him.

It didn’t take long for Alvarez to notice he was facing a man with a gun. He fled back into the van. The homeowner, likely fearing Alvarez would use that van as a weapon against him, opened fire and shot the tire out.

“Once I got to the van, I was faced with another passenger inside, and the van’s now a weapon against me. The only thing I thought of was, ‘Let me shoot the tire out, so they can’t run me over,’” gun owner said.

Police arrived and took Alvarez into custody. The owner of the property was not charged with any wrongdoing but he did make an appearance in court during Alvarez’s hearing. The judge commented that Alvarez was lucky to be alive.

It’s a terrific thing when we see yet another story of a homeowner successfully defending himself. This home is supposedly located in a very nice portion of Coral Gables. Unfortunately, that makes it a target for those wishing to violently take another’s property. The problem with these types of criminals is they have no compunction about using violence and destroying property and people to get what they want. That’s why it’s so important to be a gun owner. Not only can you use it to defend yourself and your family at your home, you deprive criminals of their ability to make you a victim.

Good work, homeowner. That gun just paid for itself.