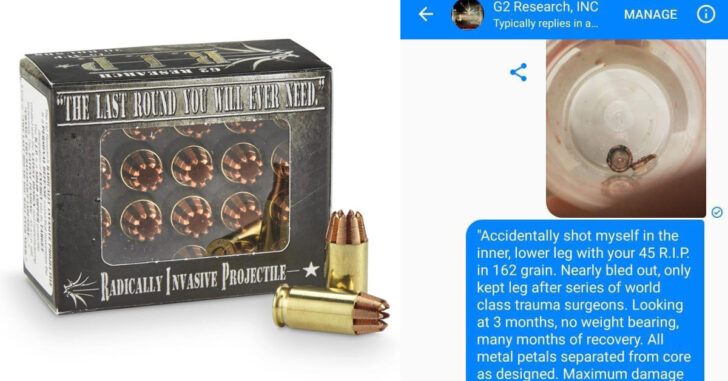 A negligent discharge is anytime a firearm is discharged at an unintended time. Let’s be clear; there is no such thing as an accidental discharge. Ok, that’s not true. Accidental discharges are a thing, such as the rare moments a firearm has a defect and will fire when it’s hit a certain way. Negligence, however, is typically the culprit.

An image was posted (the person who shared this is not the person who shot himself) that shows a screen shot of a message sent to an ammo manufacturer on Facebook, informing them that he had shot himself in the leg. The bullet that entered was made by them, and the company has a history of branding their ammo as the ultimate in destruction.

Here is how the conversation went on his end:

The accompanying text with the image reads;

The person who posted the screen shot was not the one who shot himself.

The ammo itself has seen it’s share of criticism, as well as praise. As far as praise goes, take this chicken for example:

It sounds like this guy’s surgeons had their work cut out for them. Let’s hope he learned some lessons regarding safe firearm handling. At the very least, it looks like this ammo company has a customer for life.

Previous article: Fugitive Located By An Armed Property Owner And His Dog, Held At Gunpoint Until Police Arrive Next article: City Sign Deliberately Endangers Citizens, Says "Too Bad For You"