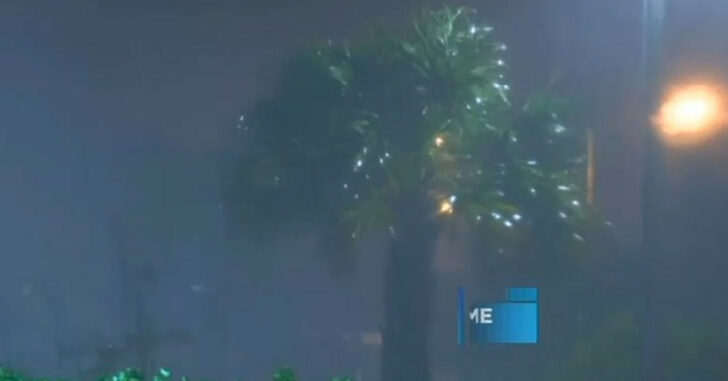 MYRTLE BEACH, SOUTH CAROLINA — One homeowner stayed behind to guard the home while his family evacuated the impending Hurricane Matthew. He unfortunately had to defend himself and his home against an intruder who beat down his door. Standing at the top of his staircase, he fired two shots down at the intruder who promptly fled the scene.

“He came across my dining room and to the foot of my stairway. I had a revolver and fired at him twice,” the homeowner said to KSLA 12 News as he pointed to two bullet holes. “I missed obviously, but I think I scared him.”

The homeowner said he thought the intruder wasn’t expecting company. With Hurricane Matthew expected to sweep by Myrtle Beach, the intruder likely anticipated many homes being empty and ripe for the picking. The bad guy did not expect to encounter a man willing to defend his himself and his home.

“He certainly didn’t expect to see me,” the homeowner said. He heard the man nearly choke.

“I called it a muffled scream. I think it got caught in his throat,” he said.

Police arrived and, as the homeowner described, were extremely supportive of his situation.

“I don’t remember anything about the hurricane at that time. But the police were just as nice as could be, and the police couldn’t have been more helpful to me. They probably settled me down a lot,” the homeowner said.

The Myrtle Beach police department were out in full force during the hurricane to ensure that people were safe. Thankfully, this homeowner had enough charge left in his cell phone to call police and alert them to the situation.

So, for one intruder, he had the opportunity to live to learn about his mistakes and a homeowner learned to appreciate his revolver just that much more.

A gun is only effective as the person who wields it. In responsible hands, it can be a tool to preserve life. We’d like to point out that the term “shoot to neutralize” applies even here. In this case, while the homeowner didn’t hit his target, he managed to neutralize the threat. The thief fled and, in doing so, was no longer a threat.

While we love to showcase stories where the bad guy gets taken down, we’re more happy to report that another home owner was able to defend himself and his property. Carry responsibly and always.