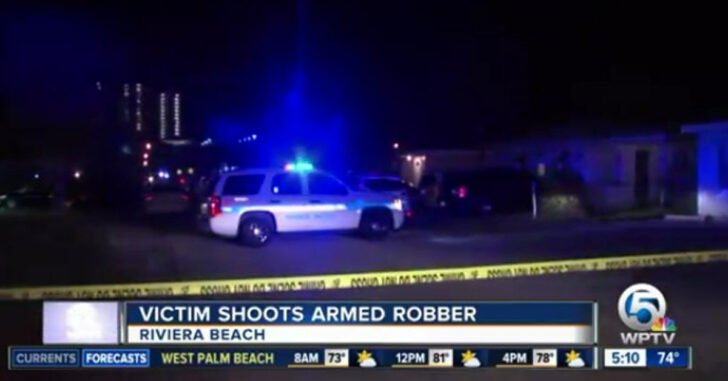 RIVIERA BEACH, FLORIDA — Three men were having a barbecue on the front lawn when Julnord Vilsaint, 36, showed up with a gun and demanded their possessions. One of the men got a shotgun out from the bed of his truck and shot Vilsaint twice. Vilsaint collapsed and later died.

According to a police spokeswoman’s report to WPTV West Palm Beach Florida News, police found Vilsaint dead in the road. Beneath his body was a handgun believed to be in his possession and one of the victim’s cell phones. Police searched around the area and discovered a stolen vehicle that they believe Vilsaint drove to the scene of the crime.

The incident happened around 8:55 p.m. and it is still under investigation.

Three people hanging out, having a good time, and all of the sudden an armed robber appears. What do you do?

It’s too late to make those second guesses about a firearm when the situation is underway. Thankfully, one of the guys there was able to retrieve his shotgun. It could have gone way worse. Once the robber’s gun is already out, it’s extremely easy to mess things up. It’s even harder when that gun is not directly in your possession.

I don’t know a single person who sits in their front yard, grilling, with a shotgun slung. I’m sure it happens but it’s just not the circles I normally run in. So, in order to make it all the way over to the bed of a truck and retrieve a shotgun, point, and fire twice, Vilsaint must have not been paying attention or had his attention focused away from him.

That’s a dangerous strategy, too. Running a ploy to pull a bad guy’s attention away can open up another victim to attack. It can also get you hurt.

In these sorts of potentially violent situations, it all comes down to the choice of whether or not you’re willing to be a victim. In a recent article we did about Lance Thomas’ experience as a concealed carrier in Los Angeles during the mid-90s, we remarked on his resolve.

Despite facing down the barrel of a loaded gun multiple times, he still had the resolve to draw his gun and fire. He lived. In many cases, the bad guys didn’t. But he also got shot multiple times.

That’s the situation we’re unfortunately faced with once the gun is out and pointed at someone. If it’s not us, it’s someone — and we all hope it’s the bad guy.

This guy did a decent enough job. Let’s all do our part and stay prepared the best way we know how — carry everyday.