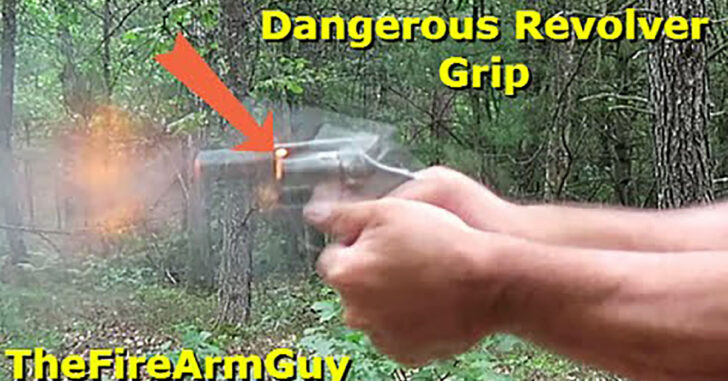 First, it is important to be aware of the small cylinder gap and the potential damage that it could cause. The shooter will need to rotate their support thumbs downward to avoid that area. In the video, I show two ways to grip a revolver that work well for me. Other people use a different style while maintaining control of the revolver in a safe manner. Whichever way you choose, be sure to avoid the “flash” from the cylinder gap which has caused so many people to injure themselves.

With the range video, I show the potential damage that could occur with a .357 magnum round. I chose to use .357 magnum because it is a popular carry choice for many CCW people. I will note there is a great degree of gasses released with heavier rounds such as a .44 magnum and others.

The video will prove that the energy released from the cylinder gap is serious stuff. The gasses and particles even put a slice in a carrot that was as thick as a finger.

When I posted this video, there were so many people who said they injured themselves from shooting a revolver. Many choose to wear gloves due to their experiences. I made these videos to provide a “public service announcement” to my fellow shooters to use caution. None of us want to be “that guy” who ends their range time early from an injury. So please, watch the videos, use caution, and spread the word.