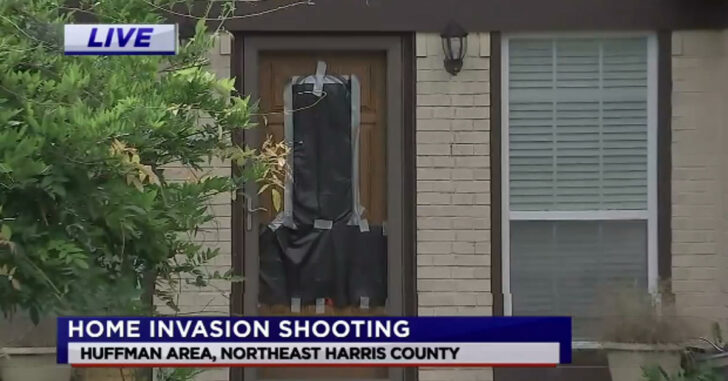 HARRIS COUNTY, TEXAS — When one homeowner heard the loud smash of glass breaking, he raced to get his gun and respond. He saw his front door window was busted clean out and a man was reaching inside to unlock the door. Taking judicious aim, he fired two rounds through the enclosure, critically striking the home intruder.

As Harris County deputies arrived on the scene to take statements and conduct their investigation, ABC 13 noted that many neighbors came forward to report that the man who was shot met the description of a man who had been breaking into their vehicles overnight.

One of the neighbors had a 9 mm pistol stolen out of his truck and he reported it to law enforcement. Thankfully, deputies recovered the firearm and returned it to him.

SIDENOTE: This is why we don’t keep firearms in our vehicles when there’s a better alternative of keeping them on our person or secure in our home.

Because the firearm was recovered at the scene, we can conclude that this burglary suspect was indeed armed with a stolen gun. For the homeowner who responded to the break-in, he knew his pregnant wife and their unborn child depended upon him to defend them. If he hadn’t acted as quickly as he did, he may have had a gunfight on his hands thanks to that stolen firearm.

The suspect was evacuated to a hospital and his condition is unknown at this time. Suffice it to say, he took two rounds to his exposed area reaching in through a door window, so he’s probably not going to be playing beach volleyball anytime soon.

The take-away for gunowners is this: keep your guns locked up in your home or secure on your person. If you have to store them in a vehicle due to working or shopping in a ‘gun free zone’, do so in a place that is not readily accessible by thieves.

As for the homeowner, he reacted with mighty precision in this and it’s what we would hope for anyone stuck in that unfortunate predicament.

Thankfully, in the State of Texas, defending your home with deadly force from intruders is still perfectly fine and dandy with their state laws. Unfortunately, Oregon has not caught on.

Stay safe, keep your gun handy in the home, and carry everyday, everywhere you legally can.