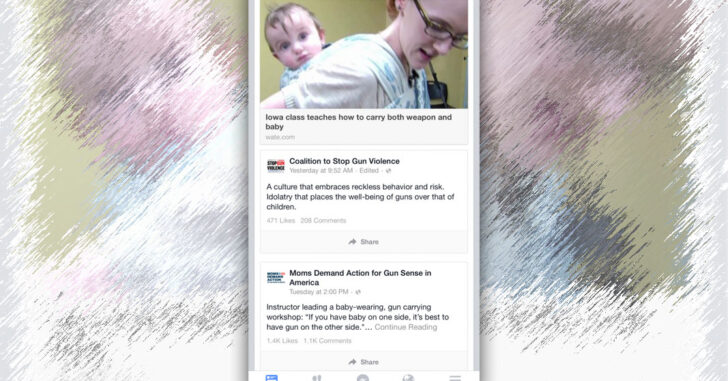 Moms Demand Action for Gun Sense in America (MDA) remains this country’s most active civilian disarmament organization. What they lack in size, they gain in media attention (adoration?). Given the paltry turn-out at MDA events, you’d be forgiven for thinking that their non-dues-paying “members” number in the hundreds. In fact, MDA has nearly 300k followers – on Facebook. Every now and then their FB page posts a link to something that freaks them the f out, inspiring the echo chamber’s denizens to howl with sanctimonious outrage. For example, this story from Iowa’s wate.com . . .

An Iowa woman is leading a baby-wearing, gun carrying workshop.

“If you’re a mother, and if you’re an armed mother, they have to. You have no choice,” said Melody Lauer/mother-gun instructor.

Lauer is a mom and an expert in two entirely different worlds.

“I was actually working at both a gun store and a parenting center at the same time,” Lauer said.

She’s not trying to convince parents that they should carry a gun. Simply encouraging them to do it safely, if they choose to.

“We have seen a huge insurgence in young mothers – mothers of young children, wanting to get into firearms. And what’s happening is we don’t have instructors that are addressing their needs. So they just do it. They don’t do it right and then they end up having an accident,” Lauer said.

So as a firearm instructor and parenting expert, she’s going where no one has gone before.

“If you have baby on one side, it’s best to have gun on the other side,” Lauer said.

“To our knowledge, nobody is doing this yet. The interest was so great that she actually had to turn off or shut off the registration. Otherwise, we would have had two-three times as many people here,” said Barry Snell, Crossroads Shooting Sports.

You can read more about the class at yahoo.com. Meanwhile, not to coin a headline, but OMG! Guns! Mother with Babies! Mothers with Babies With Guns! OMG! No really.

At last look, the MDA FB post received 1125 comments, which is, it must be said, a whole lot of comments. Here are the two most popular.

We’ve been here before, right? Mr. Chandler projects his own fears onto concealed carriers, worrying about their supposed propensity for creating daily accidental homicides. Ms. Hincman shares her desire to eliminate Americans exercising their natural, civil and Constitutionally protected right to keep and bear arms from the face of the earth. Thumbs up!

So much for American exceptionalism. I wonder if Banu knows that ISIS is torturing, raping, beheading, crucifying and executing children? Or that hundreds of thousands of children starve to death in third world countries because of political corruption and civil war? Perspective, people! Get some. Here’s Susan Burke’s take, whose Facebook page reveals that she’s a tin-foil hat wearing MDA member. Literally.

In some ways, I agree. The battle to restore our gun rights continues.