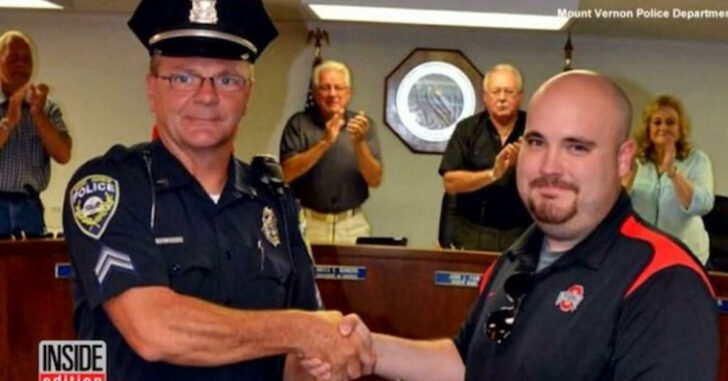 MT. VERNON, OHIO — When a wild meth-head jumped on officer Michael Wheeler, it went from a simple trespassing violation to a fight for his life. As he recalled for Inside Edition, Cpl. Wheeler was fighting a man who was high on methamphetamines and was taking the upper advantage. When his shoulder microphone got knocked away from him, Wheeler knew backup wasn’t coming.

That’s when he began to suspect the worst — this was going to get bad. His suspicions were confirmed when the meth-head started trying to access his gun. Wheeler reported there were bystanders just watching this criminal take advantage of a police officer.

There’s got to be no worse feeling than to see people watching violent harm come to you and do nothing to stop it.

Just when there appeared to be no hope this was going to end well for Wheeler, the meth-head sat up and put his hands up. Wheeler told Inside Edition he was completely confused with what was happening.

That’s when he noticed a man standing over both of them and he had a gun. Initially, Wheeler panicked as he was unsure if the gun was pointed at him or the meth-head. That’s when the man announced he had a concealed carry permit and the meth-head froze in place. He knew the fight was over for him. Wheeler wasted no time knocking the suspect ot the ground and handcuffing him.

Wheeler credits the actions of this Good Samaritan with potentially saving his life.

“I wish a lot more of society would do what he did. There were people standing around, but they were just watching. I kept wondering why people didn’t do anything.”

All it takes is one person to do something.

Concealed carriers aren’t sworn officers of the law. They’re not legally obliged to step in and potentially put themselves in harm’s way for another. It’s a choice. And in this particular case, that choice likely saved the life of a police officer who received no assistance from bystanders while he was being brutally attacked.

These are the hallmarks of a successful defensive gun use. Cpl. Wheeler was able to congratulate the concealed carrier in a special award ceremony held at Mt. Vernon Police Department where the man was honored with a Citizen’s Award of Valor.

He likely didn’t do it for the recognition. He likely did it because it was the right thing to do. And, in this world, under these conditions, at this time — we need more people like him.