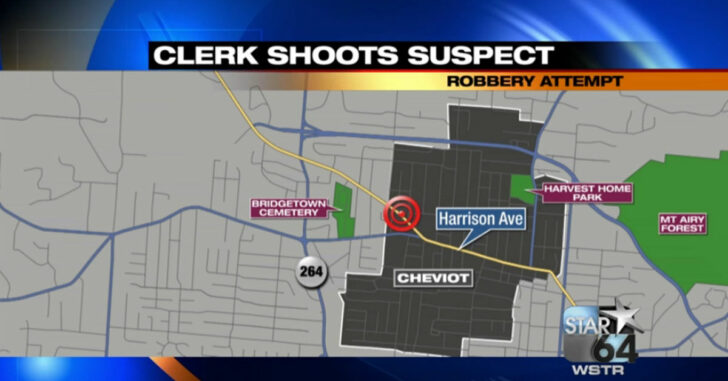 CINCINNATI, OHIO — The tables get turned on an armed robber who brazenly walked into a gas station with his pistol drawn. The clerk was a licensed concealed carrier and seeing the surgical gloves, handgun, and mask, quickly figured out what was going on and let his training take over. He managed to score one direct hit and that was enough to force the robber to flee.

According to Local 12 WKRC Cincinnati, Cincinnati police picked up the suspect not far from the scene of the crime where he was matched to a description given by the clerk. He did have a gunshot wound so they took him to the hospital prior to booking him.

Because the bad guy didn’t carry his ID on him, they’re waiting to find out the identity of the armed robber apprehended in this case.

It all comes down to situational awareness.

The armed robber reportedly didn’t have a chance to get off a round on target before getting shot. It was pretty obvious a man walking in with a mask, hoodie, surgical gloves, and a drawn pistol in his hand obviously wasn’t coming in to pick up a fountain drink. That said, the clerk waited until the bad guy tried to point the gun at him before springing into action.

Situational awareness and knowing the proper use of deadly force — these are elements sometimes first introduced in a Concealed Carry course or as part of supplemental pistol safety training. They’re kept honed and ready to use by regular practice at the range and carrying your concealed carry handgun everywhere.

High visibility jobs, like being a gas station clerk, can increase the likelihood that a bad guy is going to rear his ugly head. However, for just about everyone — we don’t know when a violent bad guy is going to show up. He’s not going to text us five minutes prior and let us know, “hey, look for the big ugly dude pointing a gun at you.”

And if you know a bad guy that does do this… Well, call the police and let them know because they’ll be happy to show him the inside of a cell.

For the rest of us, we have to depend on our senses to keep us aware of when a potential danger is near. This means actively scanning and looking around. Too often we can get caught face down on our phones or lost in our own thoughts. Everybody, especially at work, is probably thinking about somewhere else they’d rather be.

It’s our job to be present in the here and now. It’s the only way we have a chance of responding quickly to an armed threat.

Previous article: #DIGTHERIG - Ryan and his SPRINGFIELD XDM 40 3.8 COMPACT in an Alien Gear Holster Next article: Woman Testifies Against Armed Assailant In Parking Garage -- Why We Carry