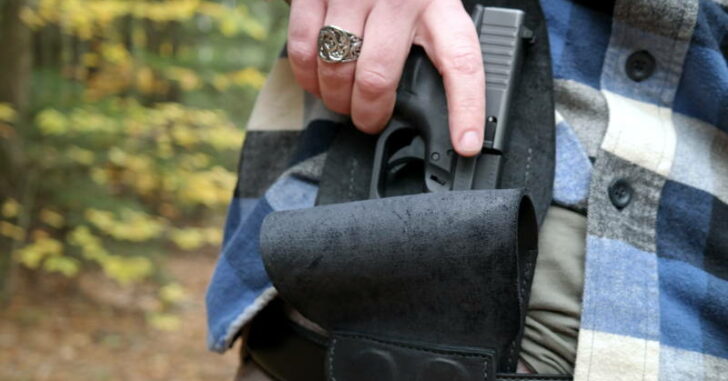 North Carolina could be the next state to get permitless concealed carry passed through the legislature. It’s still a long shot. The bill has been filed with the House and it’s making its rounds through the review process. But here’s why we’re hoping it works…

At present, North Carolina has a reasonably permissible open carry system in play. The concealed carry process, though, has put a lot of strain on local sheriffs and police departments. And different counties in North Carolina view the Second Amendment.

Mecklenburg County, for instance, wanted to extend the amount of time to conduct its background investigation to ensure permits are issued to people who its officials believe are deserving of a concealed carry permit.

We’ve already seen in states like Louisiana that when the budget doesn’t include enough money for police to go after crime AND file paperwork for concealed carry applicants, the system sort of breaks itself.

And let’s not underplay how concealed carry permits affect handgun sales in North Carolina. In that state, if you want to purchase a handgun, you have to apply to your local sheriff’s office for a ‘permit to purchase’. This requires you to file paperwork, pay money, and wait until the sheriff’s office checks all your references to ensure you’re fit to carry.

That’s darn near requiring a ‘just cause’.

This permit to purchase is nothing more than an attempt for the state to step even further between a person wishing to obtain a handgun. You don’t need a permit to purchase for a rifle or shotgun but somehow a handgun represents this advanced hurdle that is altogether pointless.

There is no argument about the ‘founding fathers’ seeing the wisdom in restricting concealed carry or any of that other garbage dredged up to defend the heavy restriction of concealed carry handguns. All of those elements are new inventions and have nothing to do with the original charter of the national constitution or its subconstituent states.

In conclusion, it’s high time North Carolinians re-evaluate their state’s stance on concealed carry. And that review may include realizing that concealed carry laws are nothing more than the state sticking an extra foot between a law-abiding citizen and a handgun. Hopefully, the state legislature will decide that there is no need for that foot to exist. If you’re from North Carolina, contact your local House Representative and let him or her know how you’d like the future of permitless concealed carry to go in your state.