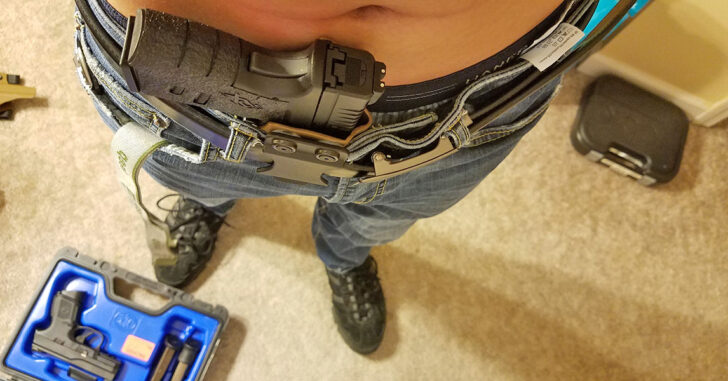 The famed Greek writer Homer stated “The blade itself incites to deeds of violence.” This sentiment is embraced by the anti-Second Amendment forces in our own contemporary times. People with a phobia of weapons impart mystical power onto inanimate objects that would suggest the object itself is the motivator for action. While I love the Iliad and the Odyssey, Homer was wrong and his sense of human violence was about as realistic as his sense of human history (in other words, not at all). We have several decades now in the United States that point to a clear trend: violent crime is much lower than it was decades ago, and there are a lot more armed citizens walking the streets today than ever before. Despite the anti-gun lobby screaming warnings of blood running in the streets, we have seen the exact opposite.

The vast majority of legally armed citizens are law-abiding and peaceful and this article is intended to re-enforce the appropriate demeanor that we the armed should possess. If there is a single word that, in my opinion, should best describe the armed citizen it would be “non-confrontational.” If you carry a handgun on a daily basis, it is your responsibility to avoid or deescalate a potentially bad situation if at all possible. The fact that you carry a lethal tool on your person, and hopefully train to proficiency with it, should make you strive to be an asset to society rather than a liability. Statistically those who have a carry permit are more law abiding than those without. Beyond even this, however, we should strive to be upstanding and responsible in all of our conduct, and we should do our utmost to be courteous to those that we interact with.

The fact that you go armed should change your attitude towards those that you deal with and it should change it for the better. I have found that as I progress in my skills and experience over the years I adopt a more and more non-confrontational demeanor. I don’t experience road rage. I don’t fight with people over parking spaces. If someone is being rude I smile, tell them to have a good day, and walk away. If another driver on the road gets furious at me and flips me off or screams obscenities I just smile and nod my head. If someone becomes enraged at me I deescalate and apologize for any offense. Why? Because I have nothing to prove. Screaming or cursing at someone in retaliation for a perceived slight is for the people who are oblivious to the realities of this world. It is not becoming of people like me or some of you that may be reading this. Why do I turn away from potential hostilities if I can? Because I carry a lethal tool and a lethal skill-set and I take that seriously.

The handgun is the most effective means of personal defense we can typically carry concealed on our body. That is the reason we carry it, so that we can protect ourselves and those we love from the criminal element. With that said, how dare I, and how dare you as a fellow armed citizen, ever encourage a heated situation into a violent situation if it can be deescalated. That is why I don’t involve myself with petty nonsense such as road rage or fights over parking spaces. To borrow a phrase from Theodore Roosevelt, “Walk softly and carry a big stick.” When you carry a modern handgun you carry quite a stick. As such, walking softly is the only responsible thing to do.

In the shooting world I interact with people all the time that are, of course, completely inexperienced and uneducated about self-defense and the legal matters of lethal force. It tends to be the people most ignorant that quickly proclaim such nonsense as “shoot first, ask questions later.” Or “anyone who comes in my house without being invited is going to die.” Such cowboy mentality exists almost entirely among the untrained and unskilled. The folks who make such proclamations, whether in person or on the internet, are the people who consider themselves armed and prepared because they buy a gun, shoot it once, then leave it in a draw at home or the glove compartment of a vehicle for the remainder of its existence. I never find such bravado among the serious shooters, gun carriers, and practitioners of self-defense. The more capable one becomes in the skills of fighting, the more subtle their personality becomes regarding conflict.

I am not telling you to turn your back on a violent situation and not take action if it is warranted. I am certainly not telling you to give a deadly threat the opportunity to hurt you. I am telling you that if you carry a gun you owe it to yourself, and more importantly to society around you, to promote peace and respect and to never involve yourself in a situation that can turn into violence if you have any chance at all to safely remove yourself from it. I have carried a gun my entire adult life and I can think of several occasions when I was younger where I acted responsibly and removed myself from a situation because I was armed. Had I not been armed I may have acted like other typical young men and done something foolish. The power and responsibility of going armed and trained has made me a kinder, gentler, and better person. Let it do the same for you. Your gun may get you out of trouble should the worst come to pass, but your mouth can put you into trouble for no good reason in the first place. Don’t let that happen to you. Walk softly, and always carry your stick.